CALGARY -- Garrett Jenkinsons job, as the head teaching professional and owner of Golf Performance Canada,  is to make golfers better and he thinks he has a system that will help do that.

He just needed somewhere to put the system, when he came up with a pandemic-inspired solution.

The system is the GC Quad launch monitor, a golf simulator, that many on the PGA tour are using to help improve their game.

Jenkinson believes it’s the best technology out there.

“It’s the most accurate one everyone is using.  You see them using it on the range to get all of their data.  So I’ve found a way to use it to teach and it’s an amazing product.”

Jenkinson wanted to open up a golf centre with simulators using the GC Quad technology, but wasn’t about to do that during the COVID-19 pandemic.

That’s when he had an idea.  He called his friends at Hotel Arts to see if they would strike a deal that allowed him to turn one of the hotel's banquet rooms into a kind of pop-up golf centre.

“I thought they’re probably not doing so well in their banquet rooms,” Jenkinson told CTV.

“They can’t use those either so I just had an idea.  We shared it and everybody loved it.  That’s sort of how it happened." 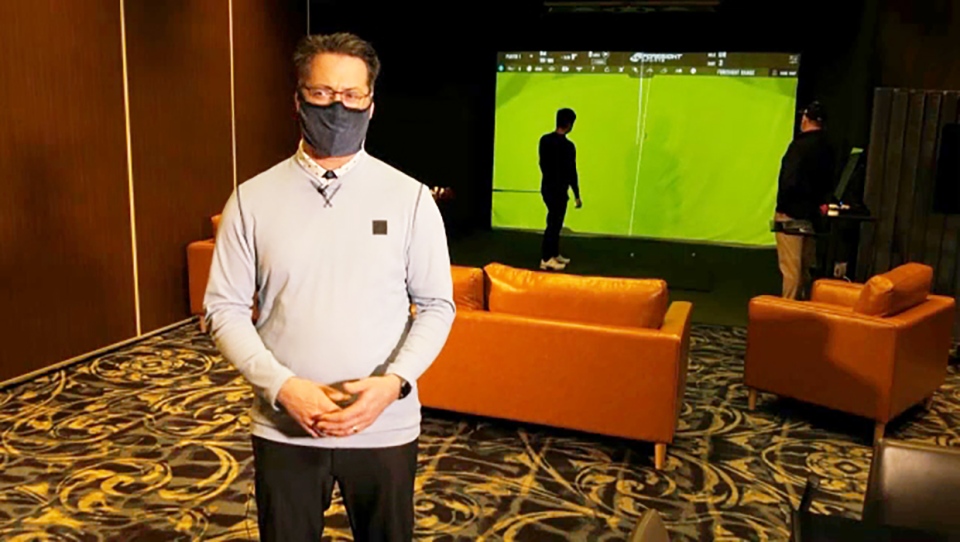 Right now they have three bays set up with golf simulators. They have to follow the health restrictions set out by the province so for now it’s just one-on-one teaching.

Mark Wilson, the hotel's general manager and VP said the pop-up golf centre is a win-win for both sides.

“Because we’re a lifestyle brand hotel, we’re looking at ways to pivot and try and drive volume to the hotel," Wilson said.

"Obviously our banquet rooms aren’t in action right now," he added, "so (instead) we lease the space to Golf Performance Canada.”

“It gives our guests an extra experience within the hotel over and above the pool and the restaurant and the things we continue to keep open."

And who knows? Maybe the Golf Performance Centre has found a permanent home in Hotel Arts.  Wilson says it could definitely happen.

“We’re in discussions. I think that perhaps we may be able to do something in the future that is part of our brand moving forward.”

Jenkinson is certainly open to the idea.  And at the end of the day he says he has one goal in mind: making his students better golfers.

“I’ve always wanted to have a building that sort of represents what I believe is how you improve your game,” Jenkinson said.

“And I really believe I’ve found the technology that allows me to possibly never teach outdoors again other than maybe on the putting green.  It really is that good.

Anyone interested in getting lessons from Jenkinson or one of the other golf teachers at Hotel Arts can email www.golfperformancecanada.com.