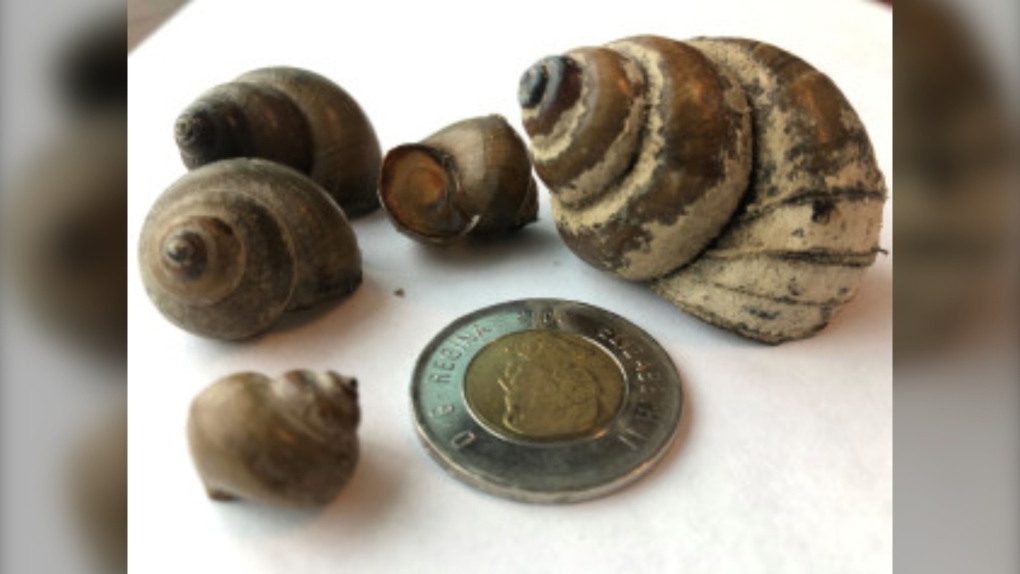 CALGARY -- Officials with the Alberta government say a slimy international traveller was found in a lake near the town of Vulcan late last year.

Alberta Environment and Parks posted Wednesday about the discovery of the invasive Chinese mystery snail (Cipangopaludina chinensis) in McGregor Lake, a reservoir located about an hour southeast of Calgary, in early December.

The province says the organism, which is one of the 52 species prohibited by Alberta law, has a large, globular shell that can reach sizes of six centimetres.

Officials say it has managed to adapt to Alberta's varying climate, which makes its discovery all the more concerning.

"This species of snail can tolerate less than ideal conditions and survive out of water for up to (four) weeks due to the protection provided by an operculum or 'trap-door' – this alone warrants concern for further spread through transportation of watercrafts or gear," writes Paige Kuczmarki with Alberta Environment and Parks.

She says the main concern about these snails is their incredible rate of reproduction and ability to out-compete native snail populations.

"Chinese mystery snail is named after its mysterious reproductive abilities of giving birth to fully developed juvenile snails, which can happen as many as 169 times per year," she wrote. "This species can impact the growth and abundance of native snail species by competing for habitat and resources, as well as effect water intake pipes and other submerged equipment as their large shells can clog and stop water flow."

There are no details about how the snail could have made it into Alberta's ecosystem, but Kuczmarki says this particular species is considered edible and are "often sold in Chinese food markets."

The province is now asking anyone with any information, including dates, photos or locations, that could help authorities learn more about how they came to Alberta.

"A photo was shared with us showing two people holding up the large snail shells, which gives us reason to believe it has been here since 2016," Kuczmarki says.

Residents can report aquatic invasive species through EDDMapS Alberta or directly through email ais@gov.ab.ca or by phone at 1-855-336-BOAT (2628).