Calgarians gathered to remember, educate and listen on Friday for the country's second annual National Day for Truth and Reconciliation.

About a dozen events in and around the city — many hosted by Treaty 7 elders — marked the day.

The largest gathering was the City of Calgary's Orange Shirt Day event at Fort Calgary, where roughly 2,000 people attended to listen to Indigenous speakers.

"Calgarians are now recognizing the importance of remembering the children that perished at Indian residential schools," said Terry Poucette with the city’s Indigenous relations office.

"Today is a good reminder to make reconciliation a part of their every day."

The event included a drum circle, traditional dancing and singing, and was back-dropped by a large flag containing the names of children known to have died at residential schools.

"And we've left a blank school because there are children who have not been found yet," Poucette said.

"I'm wanting Calgarians to better understand the history and to recognize the contributions of Indigenous people to this country."

The event focused on young Canadians.

Not only were residential school attendees commemorated, but an emphasis was placed on the growing Indigenous youth population in Canada.

Poucette said committing to acting on reconciliation is especially important for the next generation. 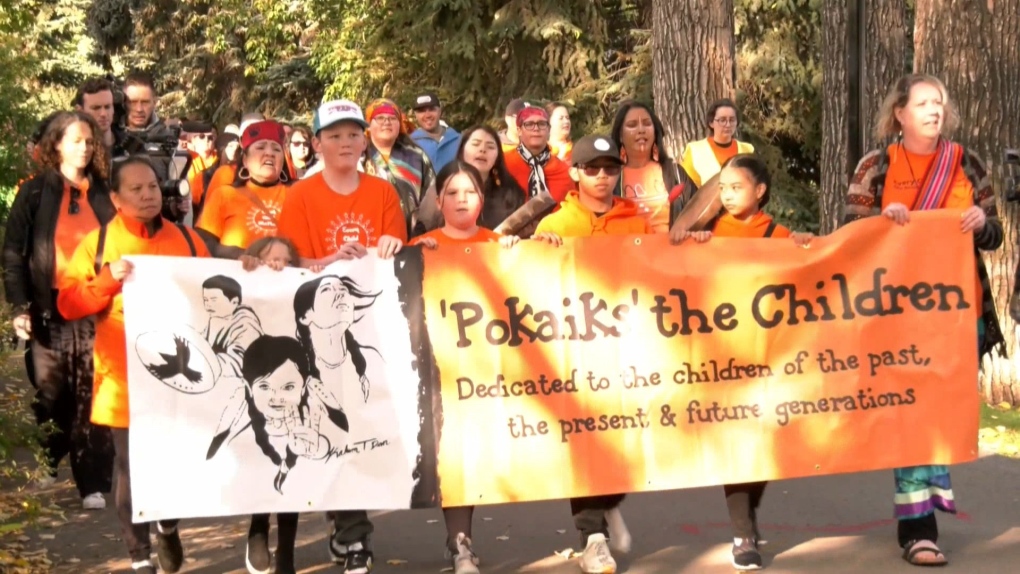 About a dozen events in and around Calgary — many hosted by Treaty 7 elders — marked the country's second annual National Day for Truth and Reconciliation.

The city's second-largest event was held at Prince's Island Park.

Calgarians marked the day walking through the island and remembering the lives that were lost to colonialism.

"During the walk, we are doing some healing together, and people are walking to show support for positive change," Colouring It Forward's Diana Frost told CTV News.

"I'm hoping people will come away realizing that it is possible to do something towards truth and reconciliation together."

The city illuminated several of its landmarks orange in honour of the day, including Olympic Plaza, the TELUS Spark Science Centre, the Reconciliation Bridge and the Calgary Tower.

Additionally, flags on municipal buildings were lowered to half-mast.

Council has committed to 43 calls to action listed in the White Goose Flying report. The report is available through the city's website.