CALGARY -- It was a bit of a different atmosphere, but the pancakes were just as golden, fluffy and tasty.

Calgarians gathered at Southcentre Mall early Saturday to participate in a traditional pancake breakfast served up by volunteers with the Calgary Stampede. The event was part of the traditional breakfasts put on by the official Calgary Stampede committee for what would have been the 2020 edition of the Greatest Outdoor Show on Earth.

The only difference this year was all the guests were served inside their vehicles, safely physically distanced from one another as well as the workers at the griddles.

The changes were put in place because of the COVID-19 pandemic, the same situation that cancelled the entire Calgary Stampede.

Organizers weren't going to let that stop them from serving up some western spirit and hospitality.

"This idea came up in about mid-April. I had done the YYC Food Truck drive-thru at this exact mall and I said, 'I don't think there's a reason we can't do this via pancake-style," said caravan committee chairman Chris Heywood.

The idea was also extremely popular among Calgarians. Originally, they started at 5,000 slots for people to sign up for and those were snapped up in about a day and a half. Another 2,500 spots were added and those quickly went too.

"Yesterday, at our breakfast at Brookfield Residential YMCA Seton, I just thought, 'Let's make tomorrow wide open and finish with a bang. You don't have to sign up, just come on down and we're going to serve pancakes until we have run out of product, really."

The committee is made up of 195 volunteers who all work together to put on pancake breakfasts for the Calgary Stampede. 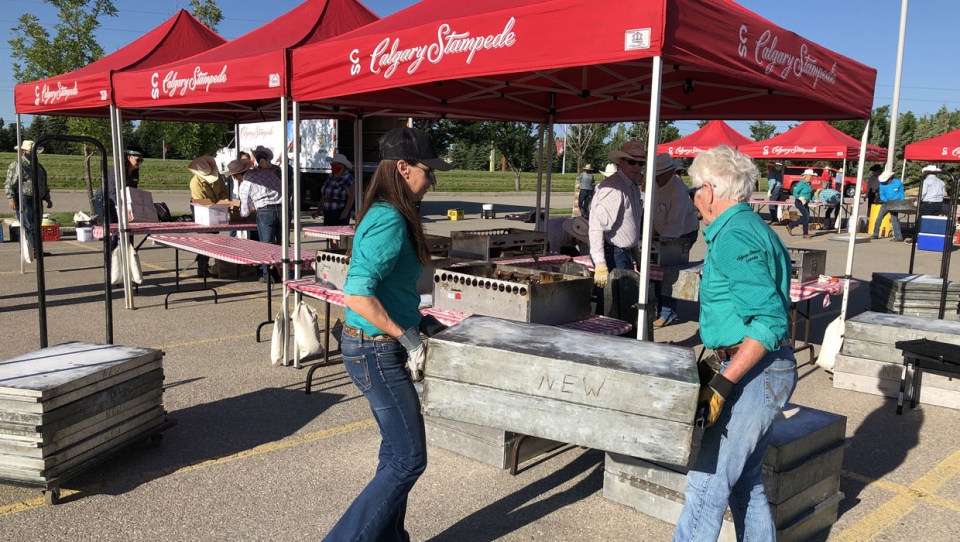 Breakfast served at Calgary malls too

Other organizations are serving up pancakes as well during what would have been Stampede week. Cadillac Fairview has two events scheduled Saturday at Chinook Centre and Market Mall.

While the pancakes won't be hot and ready for guests, officials say they'll be handing out DIY pancake kits so you can bring Stampede home with you.

"As a dedicated community member, Cadillac Fairview (CF) is helping Calgarians celebrate The Calgary Stampede and everything it encompasses - community spirit, togetherness (while apart), excitement and family fun - in a reimagined, safe and enjoyable way," the company says in a release.

Despite the lack of a live event, CF says it will still be presenting a donation to the Alberta Children's Hospital Foundation as it has done for all 59 previous years it has held the breakfast.

Visitors are welcomed to come to either event between 11 a.m. and 1 p.m.