Thousands pack Saddledome to be inspired by Oprah 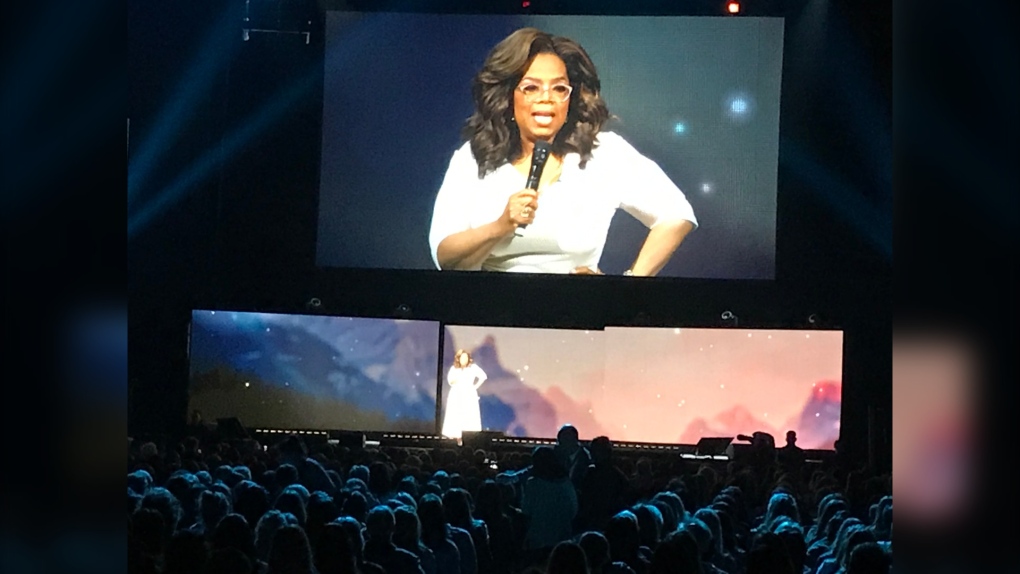 Thousands of people were in attendance at the Scotiabank Saddledome on Wednesday night for Oprah Winfrey's lone Calgary appearance of her Canadian tour.

Before the show ,and prior to Oprah's grand entrance, there was an energy in the Saddledome. Members of the crowd were taking selfies to let their friends on social media know what they were doing.

People were dancing in front of their seats until an introduction video of Oprah’s life and career came on and the crowd grew quiet, eagerly anticipating Oprah’s entrance.

"I’m over the moon, this is big time great for me," said Mary Loeppky, a loyal fan who says she's read every book the former talk show host has penned.  "I haven’t been this excited to attend an event, except for our children’s births and weddings!"

Oprah appeared angelic when she took to the stage in a long white dress and the crowd greeted her with thunderous applause.  Oprah returned their enthusiasm.

"Oh, Calgary! Oh Cal-ga-reee, look at you! Look at y’all in here, in the Saddledome! Good to see you in the box seats up there!,"

"This is great that you’re here. it's great I’m here and it’s not SNOWING!"

The media mogul reminisced about the last time she was in Calgary. She said she couldn’t see the city and she barely could hold herself together because it was so cold.

Oprah gushed over the natural beauty of Calgary’s surroundings, mentioning how Banff's mountains are among the most breathtaking in the world and how she would love the chance to swim in Lake Louise.

The audience was informed by Oprah that, given their presence Wednesday, they had signed up to be warriors of light to combat the increasing darkness in the world.

"I want to leave you with little pieces of light that you can take with you, so you can continue to grow into the truest, highest expression of yourself as a human being," said Oprah, referencing the message of her latest book offering, 'The Path Made Clear'. She says people should acknowledge and listen to their inner voice and embrace the 'ah-ha' moments they encounter.

"I knew that somewhere inside myself, I recognize that as truth of the ah-ha moments."

Oprah says some of the biggest mistakes of her life were the result of not listening to her inner voice.

The Path Made Clear tour will continue with appearances in Edmonton on Thursday and Vancouver on Monday.