OKOTOKS, ALTA. -- It may have been the most un-Canadian thing ever: how do you take down a family's homegrown toboggan hill, built to delight children and liberate them from their screens in the middle of a western Canadian winter?

That’s how the chief administrative officer with the Town of Okotoks, Elaine Vincent views what happened February 5.

“That was viewed as wrong,” said Vincent. “From our perspective there was no malicious intent, it just didn’t go right.

And fix it they have in just three business days. The town worked with the Jones family to come up with solutions that would reimburse them and benefit everyone in the community.

Last December, Nevin Jones was helping everyone on his street shovel snow after a pre-Christmas blast of winter.

“Didn’t have anywhere to put the snow,” said Jones. “So we decided to go around and asked all the neighbours and say if I put it all on my lawn could I build a snow hill for the kids? And (I) got a unanimous decision of 'yes, let's do it!' and obviously it was a great idea that turned into a lot of enjoyment for the kids.”

Jones’ wife Jamie and 3-year-old daughter Paisley were regulars on the front yard hill named Mount Crumpet and shared it with other kids in the neighbourhood. Jones says it was a way for families to abide by provincial COVID-19 restrictions.

“That’s what they want us to do with the public health orders is to stay home and do things at home and make fun enjoyment for your kids at home,” said Jones. “So that’s what the idea was behind it, something we could do that keeps them home, keeps them safe.”

The toboggan hill was finished with lights for evening rides down. It lasted for over a month but then someone in Okotoks filed a complaint with the town. 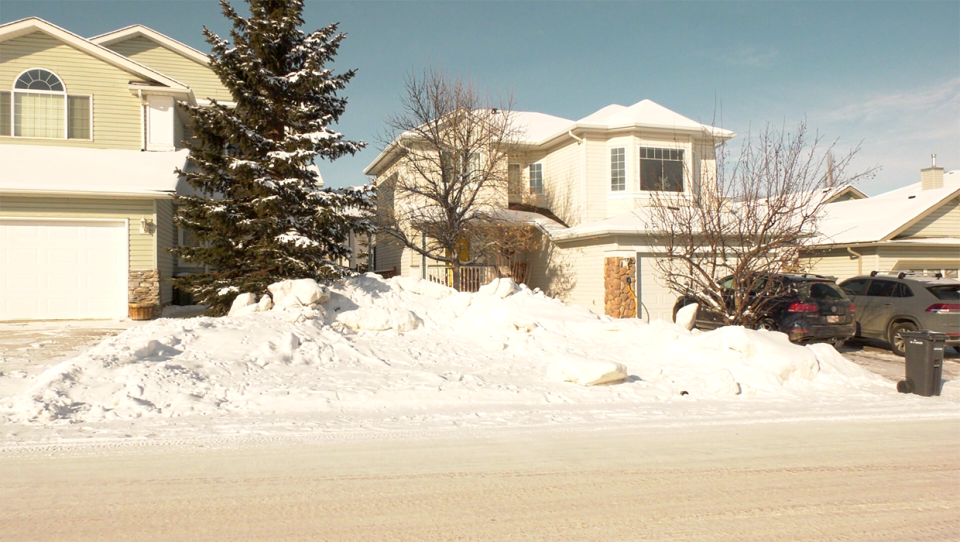 “We had piles of snow throughout the town,” said Vincent. “So the town received a complaint about a snow pile and innocuously put that on the list of work to do, dispatched our crew to go pick up snow and we didn’t get it right, it’s as simple as that.”

Town staff not only removed the snow but also some lights and toboggans left outside. The town reached out to the Jones family February 6 to start its investigation to find out how heavy duty equipment was brought on to their residential front yard.

On February 10, the town reached an agreement on how to move forward by replacing the missing items from the yard and making sure something like this doesn’t happen again in Okotoks.

“We will follow up with the home owners again in March or April depending on when the snow melts to see if we’ve done any damage and absolutely correct that,” said Vincent.

“And then what we’re going to do is any fines that would have been given to the town, we’re going to take and use to put towards parks and recreation and build something in our community that’s better for everyone,” said Jones.