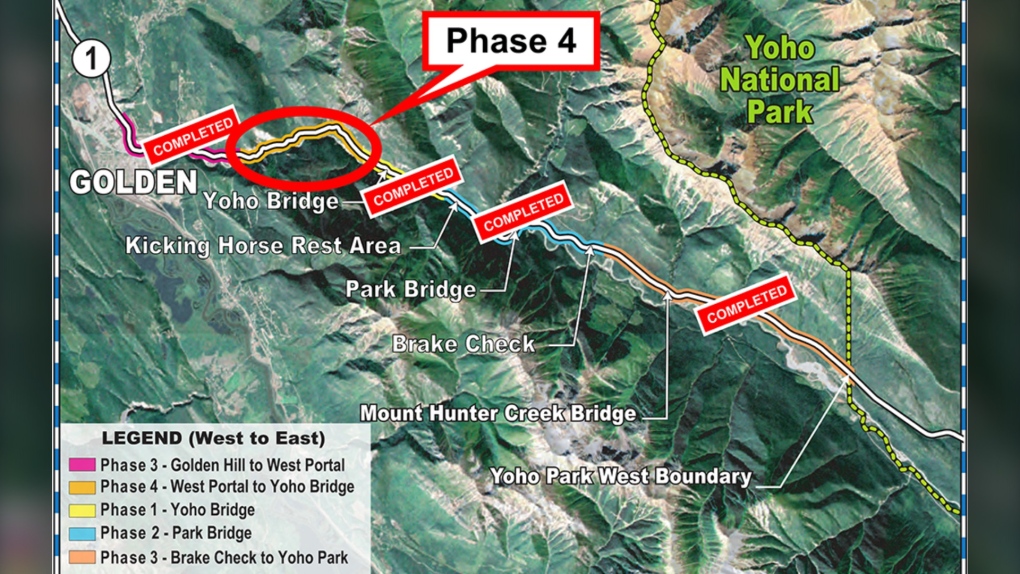 Phase 4 of construction on the Trans-Canada Highway in Kicking Horse Canyon in B.C. will see a detour in place into December. (British Columbia government)
CALGARY -

The fourth phase of an ongoing construction project on the Trans-Canada Highway in the Kicking Horse Canyon is underway and drivers should expect to encounter significant traffic disruptions.

The highway had been fully open to vehicles in the canyon, located east of the town of Golden, B.C., during the busy summer season but work has ramped up following the Labour Day long weekend.

As of Sept. 20, a section of the highway is closed to traffic west of Yoho National Park and a detour will be in place in the area until Dec. 1.

The first three phases of the project saw 21 kilometres of the highway transformed from two to four lanes. Work on the fourth and most difficult section will involve widening shoulders to accommodate cyclists. realigning 13 curves, and installing median barriers and additional wildlife exclusion fencing and passages.

The scheduled completion date for the 4.8 kilometre stretch of highway is set for late 2023 or early 2024. The projected total cost of Phase 4 is estimated at $601 million and the Government of Canada has contributed $215 million.

According to the British Columbia Transportation Investment Corporation, there may be brief highway stoppages, overnight closures or potential multi-day closures in the area throughout the off-peak shoulder season as work progresses.

The Kicking Horse Canyon project is part of the Highway 1: Kamloops to Alberta Four Laning Program complete with a 100 km/h speed limit.