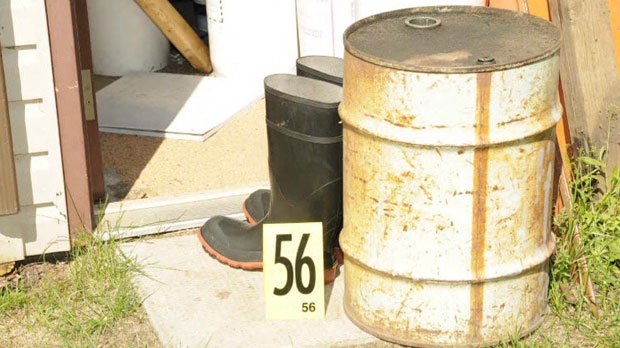 DNA from all three victims in the Douglas Garland triple murder trial was found on a pair of rubber boots seized by police from the property in July 2014.

An expert witness on DNA is testifying at the triple murder trial for Douglas Garland and told the court that DNA from the victims was found on many items that were seized from the Garland farm.

Garland, 57, is charged with three counts of first-degree murder in connection with the death of Alvin and Kathy Liknes and their grandson, five-year-old Nathan O’Brien.

Vivian Mohrbutter, is a forensic lab specialist at the National Forensic Lab in Edmonton and on Tuesday she told the court that they typically recover samples directly from the individual, through a blood sample or a swab.

In the Liknes case, that wasn't possible so she said known DNA samples of the three victims were taken from a number of sources; Nathan's hockey helmet, Kathy's toothbrush and Alvin's electric razor.

DNA is the genetic material of all things, Mohrbutter told the court, and samples can be obtained from blood, semen, skin cells, tissue, bone, teeth and some hair samples.

She also testified that heat or high temperatures can degrade and there are some chemicals, such as RNase, that can break down DNA evidence. A bottle of that chemical was found inside a shed on the Garland property during the police search in July 2014.

When it came to samples of DNA located in the Liknes home, Mohrbutter said she found DNA belonging to Kathy on an earring found in the side entrance of the house.

Her DNA also matched blood stains found on a bed in the spare room, she testified.

The odds that it was someone else other than Kathy, Mohrbutter said, was one in 5.8 trillion.

Alvin's DNA was also found in the home, Mohrbutter told the court. She said that blood found on a pair of dumbbells had DNA that matched his and Kathy's.

Turning to the DNA evidence recovered from the Garland property, Mohrbutter told the court she found matches to all three victims and the accused on several items, including:

Mohrbutter also said that a fragment and piece of cloth that was found in the grass on the Garland property matched Kathy Liknes and that her DNA was also found on meat hooks. She said that fragments from a fire pit on the farm matched DNA from Alvin Liknes.

She then turned her focus to evidence collected from the Liknes' Parkhill home and said that a bloody bedsheet from the spare bedroom matched both Kathy's and Nathan's DNA.

Mohrbutter said blood swabs taken from a headboard, night stand, stairwell and door in the Liknes' home were a match to Alvin Liknes.

She also talked about a box of handcuffs and said DNA on the item matched Douglas Garland.

Under cross-examination, Mohrbutter confirmed that they did not find DNA from Douglas Garland at the Liknes' home.

Rod O'Brien, the father of Nathan, sat silently in court as he listened to Mohrbutter's testimony about DNA evidence. The jurors also sat silently as they took in the proceedings.

The Crown alleges that Garland took Alvin, Kathy and Nathan from their home in Parkhill to his parents’ farm near Airdrie where he killed them.

@CTVInaSidhu is covering the trial for CTV Calgary.