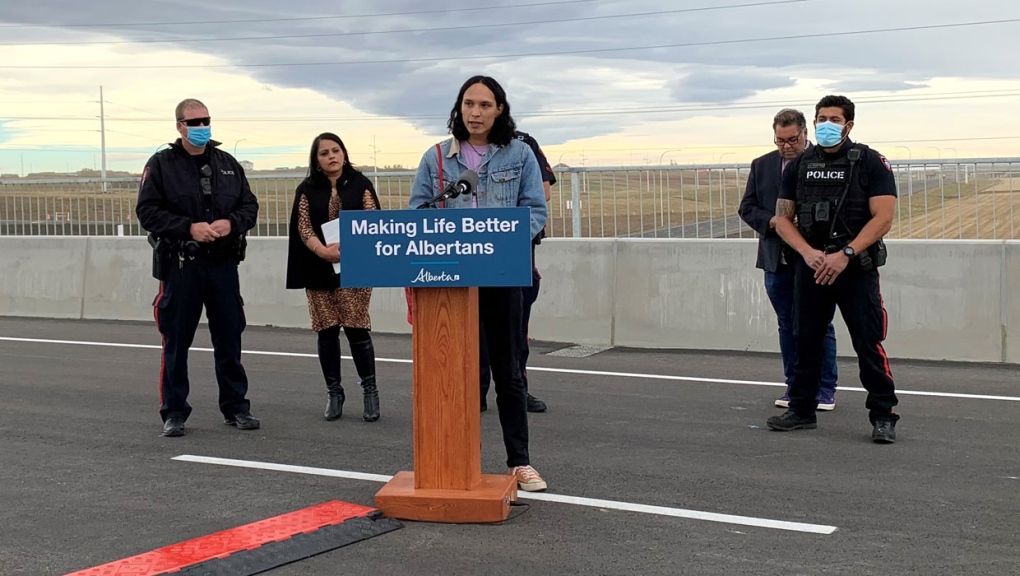 Seth Cardinal Dodginghorse, who once before interrupted a media availability for the opening of a section of Calgary's ring road, was at Saturday's event as well, attempting to have his displeasure with the project heard.
CALGARY -

Saying it was being done "with some significant regret," the chief and council of the Tsuut’ina Nation issued a statement Tuesday, refuting claims made by a protester of the south west Calgary ring road, which is part of a deal between the nation and the provincial government.

During a ceremony to open the final section of the southwest portion earlier this month, Seth Cardinal Dodginghorse went to the podium to remind Calgarians that not everyone in the nation was on board with the agreement.

Cardinal Dodginghorse made a similar protest a year earlier, when he told an assembled at the opening of a 12-kilometre section of Tsuut'ina Trail -- south of Glenmore Trail and north of Fish Creek Boulevard -- that his family had been displaced improperly, before cutting off his braid.

In their statement Tuesday, the Tsuut'ina officials refuted those claims.

"Mr. Cardinal has intimated that his voice was not heard in the debate around the transfer of Tsuut’ina lands for the South West Calgary Ring Road," it read.

"While Mr. Cardinal has family ties to our community, he is not a citizen of the Tsuut’ina Nation. Mr. Cardinal is a member of the Saddle Lake Cree Nation.

"Mr. Cardinal has also intimated that his family was treated unfairly and that family members were evicted and made homeless. This is simply untrue. Each citizen of the Tsuut’ina Nation that was affected by the transfer of land was financially compensated. Where citizens had to be relocated, citizens were built new houses."

In 2013, the nation agreed to allow the highway in exchange for $340 million and 5,000 acres of Crown land. The decision was also put to a referendum that showed an overwhelming majority in favour of the project.

"The decision to transfer the land was not an easy one and took many years of negotiations," read the statement.

"Like with any matter involving land, the community was fully engaged and consulted. Tsuut’ina Nation citizens overwhelmingly approved the transfer in a referendum. As in all votes, some people will not like the outcome. But that does not afford the right to try to overturn or disrupt the decision, and the mandate it provides, by misrepresenting it."

In total, the southwest portion cost more than $1.4 billion to build. Once fully complete, the ring road will consist of 101 kilometres of free-flow travel.

The final section, known as the west Calgary ring road, is expected to open in 2024.