CALGARY -- More than 1,000 people silently marched in solidarity on the Tsuut'ina Nation Monday, wearing orange t-shirts remembering the 215 children whose remains were discovered in unmarked graves in Kamloops last week.

The march began at the nation’s health centre and proceeded to the Sportsplex outdoor rink for speeches, a pipe ceremony and drumming.

A spokesman for the nation said the turnout on Monday spoke volumes.

"I think it's a beautiful thing," said Coun. Kelsey Big Plume. "It shows that the awareness is spreading and people want to do something about it."

The event was intended to show solidarity with those who lost their lives.

Tsuut’ina also relates to the residential school system as it to had one on its land.

"A day school was here on the nation and our elders were part of that," said Big Plume. "I think what happened last week really triggered a lot of emotions from our people."

Patty Fraser said residential schools had a massive impact on her family.

"The residential school at St. Barnabas at Tsuut'ina is where my grandmother and her brothers went," she said.

Her two uncles Reginald and Bernard both had tuberculosis.

"They passed away here, along with their mother and my grandmother never knew where they were buried," said Fraser. 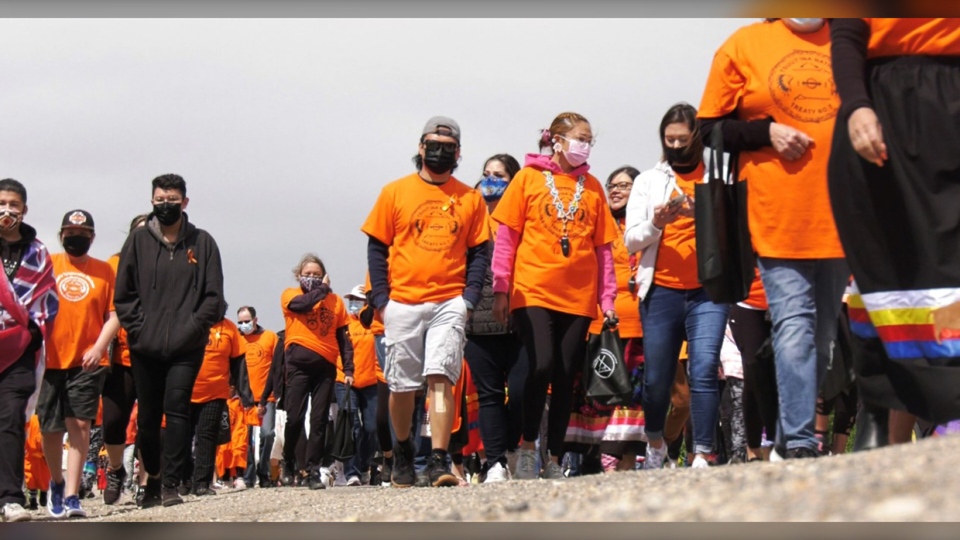 The Kamloops Indian Residential School operated between 1890 and 1978, and was one of Canada’s largest residential schools, housing as many as 500 students during a peak in enrolment in the 1950s.

The Catholic Church operated the residential school from 1890 to 1969 when the federal government, under Prime Minister Pierre Elliott Trudeau, took it over and ran it as a local day school until 1978.

Monday’s march was a moment to remember for many marchers.

"When they passed on, they were not given that opportunity to be recognized and acknowledged and I think them being found really shows that what they didn’t get in their life, they could have now," said Big Plume.

Fraser said since the discovery, more and more Canadians are willing to learn about the country’s dark past and try and mend some wounds.

Instead of trying to fix things we have to just listen, listen to the stories and understand, she said.