CALGARY -- It might be an improbable dream for most teenagers to be up in the air on their own, but that's what twins Josh and Kaleb Bagrowicz each accomplished April 17 in the cockpit of a glider at the Cu Nim Gliding Club.

"This is a goal I've been striving for this past year," said Josh. "I can't really describe it in words, it's a great experience, yah."

Kaleb says he wasn't nervous to take the controls alone in the glider.

"It was just more excitement because just the final feeling of freedom after many months of training felt so good," said Kaleb. "I would say a lot of my flight consisted of being grateful for all the instructors and my dad taking me here every weekend, yah it was great."

The twins began their flight training at the club in June 2020. They turned 14 in December that made them eligible for their solo flights but the weather wasn't right so instructor Patrick McMahon, the VP of the club postponed them until spring.

"I actually did their first flights with them which was really great," said McMahon. "It was obvious from the start that they were very dedicated, very humble and very motivated and high caliber individuals."

While the twins put in the hard work learning to fly a glider, their dad Bart encouraged the boys and watched their confidence build.

"I used to take them to the airport ever since they were tiny little kids to watch planes take off and land on a regular basis," said Bart. "I think that sort of spurred that love for aviation."

Bart spent hours out at the club just west of Okotoks watching the boys' progress but he was still nervous about them flying solo.

"I have to say though my wife, she's the rock of the family, she took it in stride," said Bart. "I was a nervous wreck I have to say, my wife was calm, cool and collected."

The boys both excelled on their solo flights and Kaleb even showed the ability to adapt to changing weather conditions from the pilot seat. 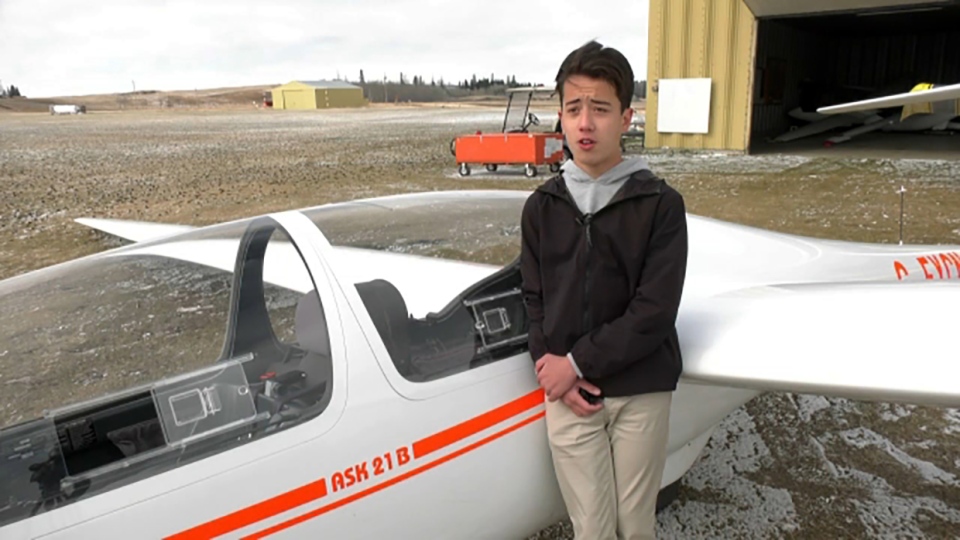 "He took off on one of our cross runways but evaluated through the flight that the wind conditions had changed," said McMahon. "He opted to build his circuit and a safe landing on a different runway than he took off on his very first flight and that's really reassuring to us that they are remaining situationally aware, making the right decisions and executing proficiently."

"We had a big barbeque out there at the clubhouse but then afterwards in the night my family just wanted to have alone time so we ordered sushi and it was a lot of fun," said Kaleb.

Josh and Kaleb hope to get more flying hours in 2021 for their goal of becoming airline pilots.

"I think learning how to glide, it's a perfect skill to learn before you move on to power planes," said Josh. "My goal for the future is to become an airline pilot so I'm thinking knowing how a plane naturally works without an engine is really key to being a good pilot."

In Canada, trained, proficient and tested individuals over the age of 14 are permitted to fly solo. They can obtain their Transport Canada regulated glider pilots license at the age of 16.

"I've not heard of twins going solo at the age of 14 before in my 20 year career in soaring," said McMahon. "So I think it's especially exceptional, the age, the fact that they are twins and the fact that they don't come from a background in aviation."