U of C receives funding boost for space science projects 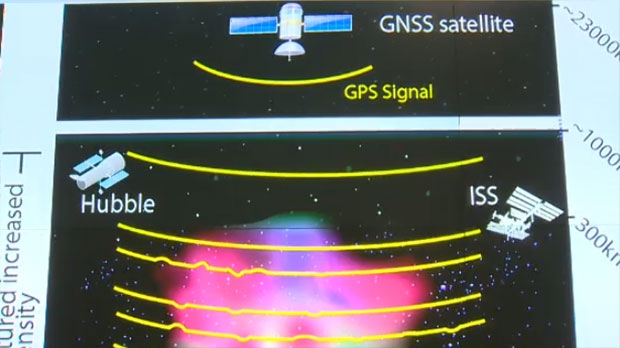 Near-earth space research is becoming increasingly important in understanding how it affects other technologies.

Canada’s Space Agency is investing $1.4m in funding for space research and four projects at the University of Calgary will benefit from the awards.

Experts say the Earth-Space research helps us to understand atmospheric phenomena, like the Aurora Borealis, and that the funding will allow researchers to continue their quest to reveal the secrets of these systems.

Emma Spanswick, a space physicist and Susan Skone, a geomatics engineer in the Schulich School of Engineering, will lead one of the projects and are looking into the million dollar question: 'What is it about the aurora or space weather that is interfering with GPS signals?'

Scientists already know that the most intense space weather begins with the sun and that solar flares and Coronal Mass Ejections send showers of radiation and powerful magnetic fields out into our solar system.

Most of those storms miss the Earth but that some of those high-energy particles do get through from the larger space environment, which can have an effect on GPS applications including surveying, mapping, hydrography and aviation operations.

Researchers are hoping that a better understanding of the physical mechanisms affecting GPS systems will help to mitigate the effects on high precision systems.

“To study the physics of the Aurora, the Northern Lights, and the effect of the Aurora on GPS signals and translate that impact on GPS into prediction monitoring, capability for precise positioning services such as marine navigation, environmental monitoring, surveying,” said Susan Skone, Professor. “When you see the Northern Lights, those are dancing electrons and those variations in the electrons affect the GPS signals, they diffract the GPS signals and that diffraction in real world terms means variations in the signal strength, in the dynamics of the signal and that makes it hard for a GPS receiver to track the signal so in some extreme cases the receiver can lose lock or lose access to some satellites which will degrade the positioning accuracy.”

"Our end goal is to be able to use GO Canada data to provide an estimate of the likelihood of GPS signal interference," said Spanswick.

Eric Donovan, Christopher Cully and Brian Jackel from the Faculty of Science will lead the three other funded projects, which will also focus on the high-energy electrons and other charged particles that come from the upper atmosphere during geomagnetic storms.

The three will explore the effects of space weather on:

For more information on the University of Calgary’s Institute for Space Research, click HERE.