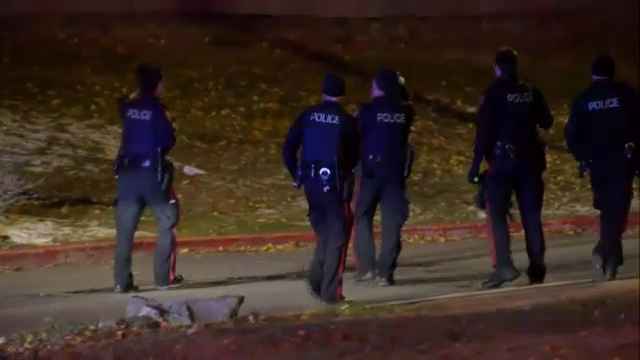 Several officers were on scene at the University of Calgary Tuesday night after reports of a man with a knife was on campus. (CTV News Calgary)

The Calgary Police Service says an investigation into a report of a man with a knife on the University of Calgary's main campus initially yielded no evidence, but now say more information is being investigated.

A shelter-in-place alert was sent to students and staff at around 9 p.m. Tuesday after police received an emergency call indicating a man with a knife had been spotted near the Science Theatres building.

Officers and campus security scoured the campus but there was no sign of a man with a knife, no additional witnesses and no security footage of a suspect.

"Upon arrival, our officers canvassed the campus, and were unable to locate any victims or witnesses to corroborate the incident, nor any evidence that an offender was involved," police said in a release Wednesday afternoon.

However, as police remained on scene, officials say they found more information about what took place, but are not releasing any specifics.

"Our District 3 general investigations unit is currently working with the University of Calgary and continues to investigate the incident," police said.

Police assured the public that they "take these types of reports seriously" and responded with multiple units just the same.

The university encouraged anyone who required support to reach out to Student Wellness Services and Staff Wellness.

Anyone with information about this incident is asked to contact police by calling 403-266-1234. Tips can also be submitted anonymously to Crime Stoppers through any of the following methods: