UCP government to ease restrictions on wooden buildings in Alberta 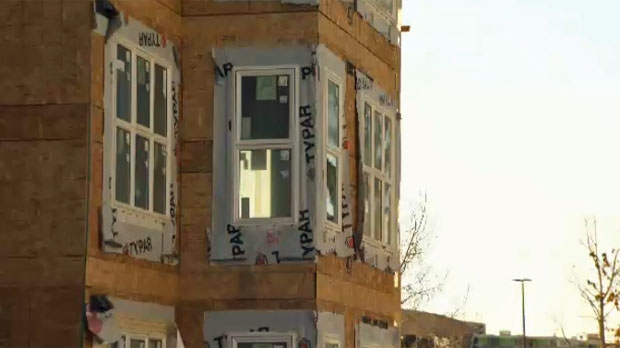 The UCP plans to introduce a new building code that will allow for wooden buildings up to 12 storeys high in Alberta. (File)

CALGARY -- Construction companies will be able to go twice as high with new wooden buildings in the province, thanks to the United Conservative Party government's decision to change the building code.

Currently, Alberta and national building codes only allow wood-building construction projects to reach six storeys, but the new code, expected to come into effect later this year, will increase that to 12 storeys.

Officials say Alberta is the first province in the country to allow the practice province-wide.

"Not only will this decision support the forestry industry and land developers, it will provide affordability to homebuyers, bolster employment, and give Alberta a competitive advantage," said Kaycee Madu, Alberta's minister of municipal affairs in a release.

Madu says the buildings will also meet all necessary standards.

The new projects will include new fire protection technology that consists of surrounding engineered wood with fire-resistive material.

Officials say the taller buildings will also generate dozens of more jobs per site and hundreds of positions at sawmills and production sites.

The Alberta Forest Products Association also applauds the UCP's decision to go with the taller builds.

"The Government of Alberta is to be commended for taking action to promote Alberta jobs and support local business," said Paul Whittaker, president and CEO of the AFPA in a release.

The AFPA adds tall wood construction will consume $40 million in locally-produced wood and can also reduce noise and disruption to residents, since most of the segments can be put together off-site.