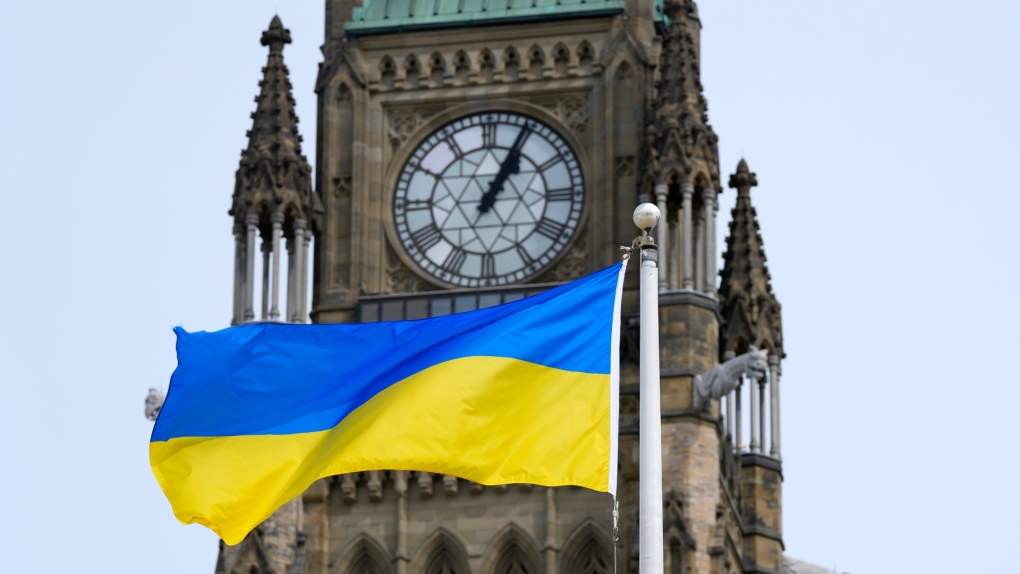 The flag of Ukraine is seen beside the Peace Tower on Parliament Hill in Ottawa, on March 15, 2022. THE CANADIAN PRESS/Justin Tang

The Calgary branch of the Ukrainian Canadian Congress is calling on the federal government to take a harsher stance against Russia as the situation abroad continues to worsen.

The organization wants to see Ottawa declare Russia a state sponsor of terrorism, expel Russian diplomats from Canada and suspend the issuance of Canadian travel visas to Russian Federation citizens.

Sunday afternoon, the organization will lead a rally and march at Calgary's Holodomor Monument to both generate support for the cause and show support for those facing atrocity in Ukraine.

This comes in the immediate aftermath of Russia forcing the annexation of multiple territories and being accused of bombing civilians as the conflict in Ukraine continues.

In a release to media on Saturday, the Ukrainian Canadian Congress's Calgary branch said, "Russia is committing crimes on a scale not seen in Europe since (the Second World War)."

"Russia’s actions are the actions of a terrorist state, which their foreign diplomats continue to deny, spreading disinformation and confusing the public," reads the release.

"Canada and allies need to designate Russia a state supporter of terrorism and demonstrate that such barbaric and cynical actions are unacceptable in the 21st century."

Sunday's events will begin with a rally scheduled for 3 p.m. at the corner of Memorial Drive and 4th Street N.E., which will be followed by an hour-long march that will end up back at the Holodomor Monument.

San Francisco will allow police to deploy robots that kill

Supervisors in San Francisco voted Tuesday to give city police the ability to use potentially lethal, remote-controlled robots in emergency situations -- following an emotionally charged debate that reflected divisions on the politically liberal board over support for law enforcement.