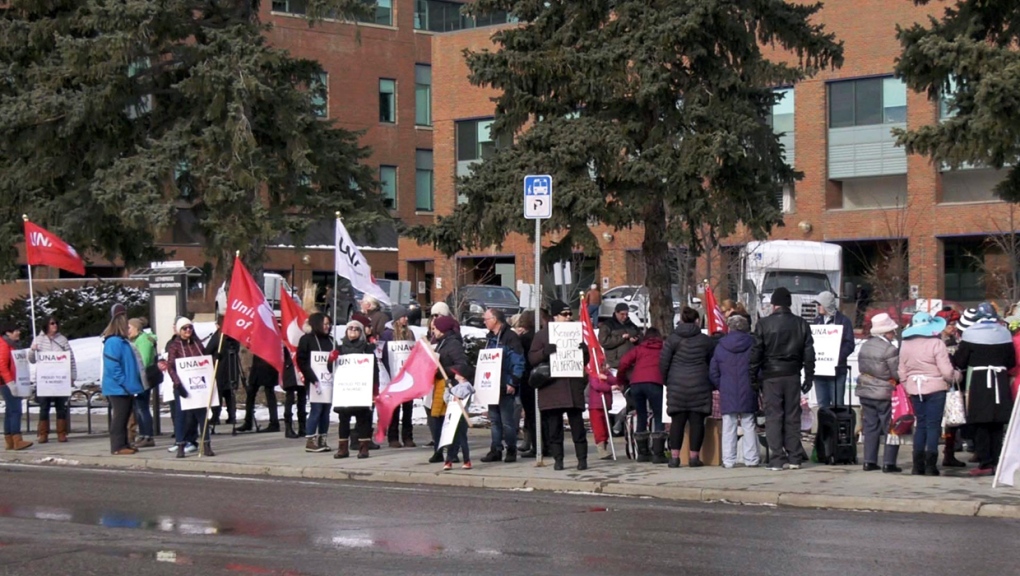 About 100 supporters picketed outside Chinook Regional Hospital in Lethbridge Thursday, showing support for nurses and the current health-delivery system.

LETHBRIDGE -- Around 100 supporters gathered outside the Chinook Regional Hospital in Lethbridge Thursday, showing support for nurses and the current health care-delivery system.

Rallies were held in 25 communities across the country, in a show of unity against expected layoffs, rollbacks, and a growing trend towards privatization of health care services.

The province has said changes need to be made to health delivery.  The unions representing these nurses say hundreds of job losses are on the horizon.

A report that came down last week said there’s money to be saved in Alberta to the tune of $2 billion — if health care delivery is dramatically revamped.

It recommends, among other things, the privatization of multiple services and a slash of overtime and premium pay for public sector workers.

The Alberta Union of Provincial Employees representing licensed practical nurses and health care aides is also affected by the cuts. Bow Island, Medicine Hat and Oyen all voiced displeasure towards the cuts, with demonstrations of their own.

“Your tax money going toward a for-profit clinic, rather than to expand health care.....they have also said that they are going to take some procedures away and just not cover them,” said Lethbridge West MLA Shannon Phillips.

Those in the trenches think the cuts will have terrible consequences.

“People are going to die.....people aren’t prepared to take care of their loved ones at home,” said registered nurse Cheryl Jackson-Flom.

“I don’t think people recognize what a service we have. The World Health Organization recognizes us as one of the top health care systems, as we are public,” said public health nurse Debbie Martin.

February 13th does mark the 32nd anniversary of the end of UNA’s province-wide strike in 1988. Demonstrators wanted the public to know today’s action were simply meant to inform them, and not scare them into thinking a strike is near.