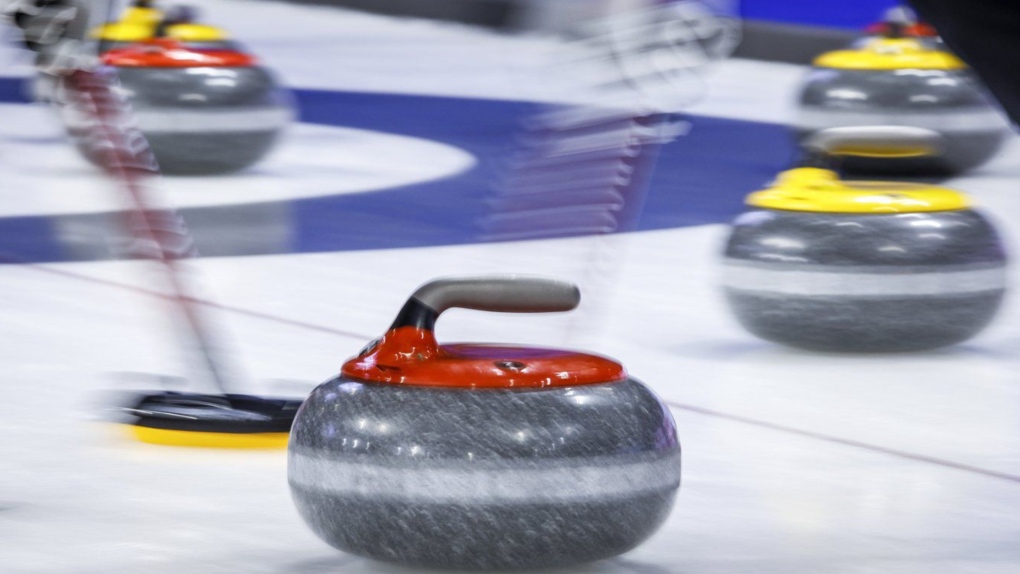 Of the 98 schools in the Canadian Collegiate Athletic Association, there are just 14 men's curling teams and a dozen women's teams this season. (FILE/THE CANADIAN PRESS/Jeff McIntosh)
CALGARY -

In the aftermath of missing the playoffs in February's Winter Olympics, Jennifer Jones and her teammates discussed why other countries have become so strong in international curling.

The conversation planted an idea in the head of Jones' second Jocelyn Peterman. She was still in Beijing when she messaged her curling club's director about establishing varsity curling teams for the University of Calgary.

A U of C alumnus, Peterman looked north for her reasoning. The University of Alberta in Edmonton graduates some of top curlers in the country and the world.

Just 16 of the 56 U Sports schools field varsity curling teams, however. Another nine operate the sport at a club level and the other 31 don't have curling teams.

Of the 98 schools in the Canadian Collegiate Athletic Association, there are just 14 men's teams and a dozen women's teams playing this season.

Calgary never had Dinos curlers before Peterman's pitch to athletic director Ben Matchett made it easy for him to say yes for 2022-23.

"We sold it as fairly hassle-free from their end," Peterman said. "I've been putting in a lot of volunteer hours to get this program going.

"We sold it that way, that there wouldn't be a lot of financial risk to them, that we could do a lot of fundraising and that we could get the support from the curling community in Calgary.

"Curling Alberta has been trying to get something going in Calgary at the university level for awhile so they were eager to help in whatever way they could."

A fundraising golf tournament produced $15,000. Peterman and husband Brett Gallant, a world and national champion, will coach the teams at Calgary's Glencoe Club.

They'll arrange for guest coaches when they're away competing either with their respective teams or together in mixed doubles.

"It was an opportunity to add another sport in a model that was very low risk to the university, but to provide that opportunity for student-athletes to compete in a sport that's pretty significant in this country," Matchett said.

Students have wanted to curl for Calgary before, but the university needed an overseer like Peterman to ensure the Dinos could ice teams year after year, he said.

Peterman has chosen five-man and five-woman Dinos teams from tryouts. She hopes to establish junior varsity teams in the future.

There are university curlers playing full time on men's or women's teams on tour and in provincial playdowns. They cobble together a university foursome for the conference championship.

University and college curling is just one piece of the developmental puzzle for Curling Canada.

A more robust post-secondary curling scene could help retain that competitive curler between the ages of 21 and 24, according to Curling Canada's youth and NextGen manager Helen Radford.

"This particular age group is a high priority for us," she said. "Jocelyn's initiative with the University of Calgary has been done numerous times by other people across the country. There needs to be a champion in that university or college that leads it."

The demands of school, starting a new job, and moving away from home for both, can knock curling down or off the priority list of a person in their early twenties.

"That's where we lose a lot of curlers," Peterman said.

Both Peterman and Radford say they're beginning to see under-25 leagues and bonspiels.

By way of top-down encouragement, Curling Canada staged an inaugural Under-25 NextGen Classic in Edmonton last month for teams and mixed doubles.

"In that event, we did have some university teams," Radford said. "We'd love every university and college to offer curling whether it's at the varsity level, club or recreational. Get more younger people exposed to the sport."

Alberta's Abby Marks and Dalhousie's Owen Purcell will wear the Maple Leaf in January with Purcell skipping an Atlantic conference team at those Games for the first time.

This report by The Canadian Press was first published Oct. 6, 2022.

Oklahoma musician Jake Flint died unexpectedly over the weekend, hours after getting married, his publicist says. He was 37.

A judge declared a mistrial Wednesday after jurors said they were hopelessly deadlocked at the trial of "That '70s Show" actor Danny Masterson, who was charged with three rapes.

Grandparent scams are on the rise. Here's how you can protect yourself

Police across the country are seeing a rise in criminals preying on fears of the elderly with what's known as grandparent scams.

Morocco has looked impressive in Group F but Canada has an opportunity to finish its World Cup experience on a high.