CALGARY -- If you're looking to buy a vacation home it's going to cost you, with prices for recreational properties forecasted to increase across the country, including Alberta, in 2021.

According to a survey from Royal LePage released Tuesday, the aggregate price of a secondary property in Canada's recreational regions is expected to increase 15 per cent across the country to $502,730 as demand rapidly outpaces inventory.

"From coast to coast, the line between primary residence and recreational property is blurring," said Phil Soper, Royal LePage president and CEO. "The trend began last summer when the option of traveling abroad was taken away, and continued to gain popularity as it became clear that with access to high speed internet, many people can do their jobs from just about anywhere."

The percentage increase isn't as high in Alberta, but the province already had the most expensive recreational market in the country.

According to the survey, the aggregate price of a vacation or secondary property in the province should climb six percent in 2021 to $942,881. 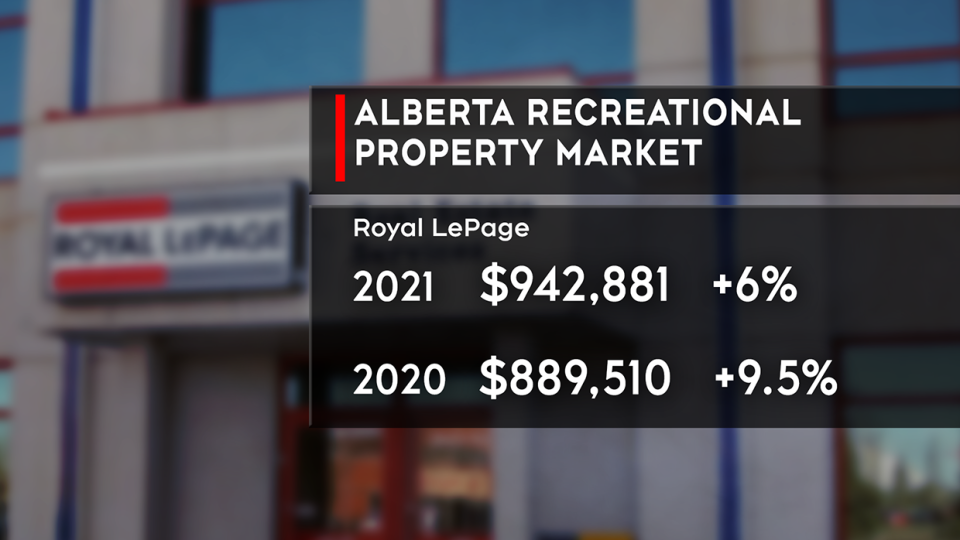 According to Brad Hawker of Royal LePage Rocky Mountain Realty, Canmore is a large recreational market in Alberta that has a significant impact on the numbers.

"Canmore is seeing unparalleled demand from people wanting to accelerate their life plans and focus on their physical and mental health," said Hawker. "We’ve seen a growing segment of young and middle-aged buyers seeking primary residences in the area. If they can work remotely from anywhere, they want to live in a place that caters to their active and adventurous lifestyles."

Demand is also growing along with prices in recreational regions with a short commute from Calgary and Edmonton. Inventory hasn't keep up with demand as 78 per cent of recreational markets in Alberta are seeing a decline in supply compared to a typical year.

The number of out-of-province buyers is also increasing, with 44 per cent of property experts in the survey reporting a spike of interest compared to previous years.

Alberta is fairing relatively well compared to recreational regions in Ontario and Atlantic Canada which are forecasting the highest price appreciation in the country in 2021 at 17 per cent.

Supply shortages in these areas are also resulting in many properties selling above the asking price.

The pandemic is also playing a significant role on real estate trends in Alberta and across the country.

A Royal LePage demographic survey from February shows 32 per cent of Albertans aged 25 to 35 say the pandemic has increased their desire to move to a less dense area.

Another 60 per cent said it's important to work for an employer that would allow them to work remotely.

"According to our research, access to high speed internet and the ability to work remotely are among the top criteria for those seeking properties in Canada’s recreational regions, followed closely by four-season usability,” said Soper.

To see how Alberta compares to other regions visit 2021 Spring Recreational Property Report.