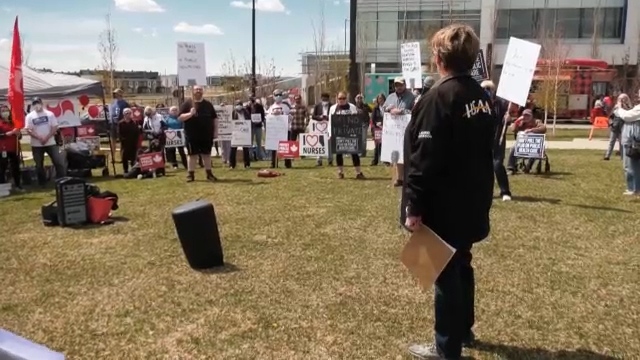 Staff and community members hosted a rally outside the South Health Campus in Calgary, on Saturday, May 14, 2022 (CTV News Calgary).

Albertans rallied across the province Saturday to support public healthcare and frontline staff.

Outside the South Health Campus, a group of Calgarians drew attention to the state of Alberta's healthcare system.

The rally follows an announcement made by the province Friday that more ICU beds are being added to Alberta hospitals to help address the surgery backlog, burned-out health care workers, and growing wait times.

Hosted by Public Interest Alberta, the group believes the UCP is taking steps toward privatizing healthcare and argue that it is not going to help Albertans.

"It seems like he's (the premier) more interested in purchasing furniture than purchasing people to work in the hospital," Westhead said. "Beds don't provide care; highly skilled people do.

"We are in a very real deficit of that skilled labour," he added. "(Health care workers) are the only thing keeping the system together."

A large crowd also gathered at the Alberta Legislature building, chanting: "How are we gonna defend our nurses? Defeat the UCP."

"They are actively and have been undermining, starving our public healthcare system and trying to feed us the lie that a private system would be better or private deliver is better," said Heather Smith, UNA president, in Edmonton.

As Pride festivities kick off around the world, many refugees are celebrating the LGBTQ2S+ community for the first time.

A barge that ran aground near Vancouver's English Bay last year quickly became an accidental attraction, drawing selfie-seekers and inspiring T-shirt designs. But after seven months, residents seem to have grown weary of its hulking presence on the shoreline.