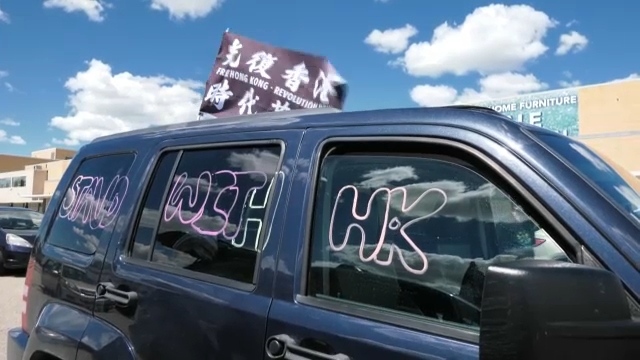 A local organization in Calgary protested against the Chinese government Saturday afternoon.

Last June massive protests against the Chinese government’s crackdown on civilians in Hong Kong erupted. Millions took to the streets in Hong Kong protesting a proposed bill that would allow citizens to be extradited to mainland China.

Katherine Leung, public relations director for the Hong Kong Cultural Club, said the protest aimed to show Hong Kongers around the world that Calgarians are united with them and to ensure people remember the pro-democracy fight.

“Things are tough (in Hong Kong),” Leung shared. “Our legislature no longer has an opposition.

“Arbitrary COVID laws that are more against freedom of assembly than actually against the virus (remain),” she added. “They are using a disease that is killing many, many people as an excuse to further their draconian rule.”

The car caravan drove through the city, making stops at the Chinese consulate and Chinatown before its final stop at Courthouse Park.

A temporary exhibition was set up to raise awareness and chronicle the 2019 Hong Kong pro-democracy movement.

For Leung, rallies like the one in Calgary are a morale boost to those protesting in Hong Kong.

“It is very important that they realize that those of us who have either left voluntarily or have been exiled don’t forget about them just because we are in a different land.

“We are still with them and our hearts are with them,” Leung said. “We have the freedom of speech and assembly, things that they don’t — that they are fighting for.”