Rita Fahlman loves being a grandma but says it hasn’t been easy as she fights for help to support her autistic grandson who has complex needs.

Six years ago, she and her husband received a call at their home in Olds, Alta. from social services to pick up their three grandchildren -- a baby, a two-year-old and a four-year-old -- who were no longer able to be in their mother’s care due to addiction and mental health concerns.

From Day 1 it has been an uphill battle as the couple has tried to navigate the legal system and find adequate resources to care for their eldest grandson, Colton, who is nonverbal and low-functioning autistic.

“Initially there were no supports at all. Social services quickly dismissed us and closed our file," said Fahlman.

"They didn’t point us in any direction and then, with a severe disability that the oldest boy had, we had to learn through trial and error.”

Colton is now nine years old and functions at a three to four-year-old level. He requires constant care, which forced Fahlman to quit her job.

“He can harm himself and others, which is tragic,” she said.

That’s reflected in the 28 stitches Colton currently has on his nose and behind his ear after banging his head on a class window pain that shattered.

“It was my worst nightmare,” said Fahlman. “This is their home, even though we understand for the safety of all the children, Colton needs to be in care.”

Colton was offered an out-of-home placement in Innisfail but the family turned it down over a number of logistical and operation concerns, including that the staff member on site had never worked with an autistic child.

Fahlman says that was made apparent during an initial visit when Colton smeared feces in his new room and the worker was not equipped to help.

“It was a generous offer we had to walk away from because it wasn’t in the best interest of Colton. He wasn’t going to be cared for, or get the quality of care he deserves as a human being,” she said.

The family is grateful for the supports they currently have, including a worker who aids Colton seven hours a day but says the most ideal option is family managed out of home placement. They say that would allow Colton to remain connected to his family, school and community but Fahlman says they’re up against changing contracts, red tape and long waiting periods. 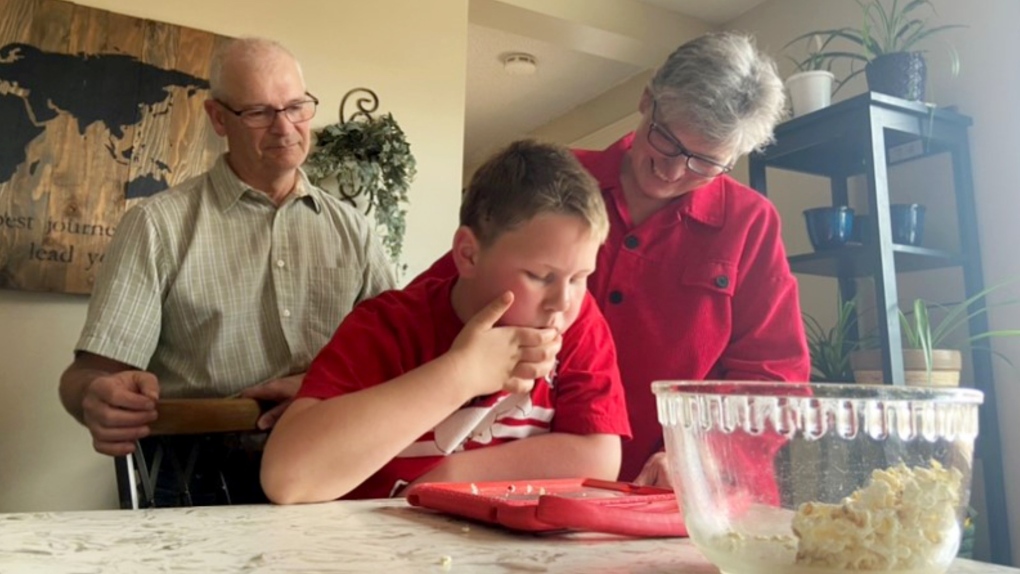 Rita Fahlman's grandson Colton is now nine years old and functions at a three to four-year-old level. He requires constant care, which forced her to quit her job.

“Colton can learn and he can develop and we’ve seen it, we’ve seen him responding and it’s just delightful, when we have special workers that invest the time,” she said.

“Is it a fight we stop fighting? Absolutely not. It’s a fight we’ll keep fighting as exhausting as it is.”

Many disability workers and advocates say they are not surprised by Colton’s story, as it reflects the fact Alberta’s disability services are failing those who need it most.

The Alberta Disability Workers Association (ADWA), a provincial advocacy organization, says the industry is facing a “staffing crisis” and have launched the “Essential but Forgotten” campaign calling on the provincial government to take action.

According to the ADWA, workers paid to support people with disabilities in Alberta haven’t had a wage increase since 2014 and many are forced to leave their jobs for other employment.

“We’re talking about the staffing crisis, the turnover that’s happening and just the cost of inflation," said Dale Cena, program coordinator with the Calgary Scope Society.

While many disability workers are not unionized or government employees, the ADWA’s online petition is calling for immediate action from the provincial government, by increasing funding to the Family Support for Children with Disabilities (FSCD) and Persons with Developmental Disabilities (PDD) programs, to help increase wages and retain staff.

“We want to show we’re essential. We’re skilled workers that deserve adequate compensation,” said Cena, who has seen first-hand the decline in morale and patient care over his 15 years in the industry.

“People are desperate. I’m very concerned for the future of our sector, not only is it about the wage increase but it’s about the quality and care for our clients. What it will do is leave an emptiness for the individuals we support. Heartache and loss.”

The provincial government recently announced a near $4 million investment to help parents of children with special needs access inclusive child care in the province.

The funding is part of a bilateral agreement with the federal government that brings the total investments to $7 million.

In a statement, Minister of Community and Social Services Jason Luan says Alberta has some of the best supports in the country for children and adults with autism, including the FSCD and PDD programs.

“As part of a platform commitment, we also invested $1.5 million to increase access to family resource centres to better support families and people with disabilities.”

The statement adds the province is working to improve the FSCD and PDD program including reducing red tape and quicker access to services.

“Work is underway to modernize technology and processes to ensure service delivery is consistent across the province. This will improve service delivery, client experiences, timely access and reduce red tape and administrative burden on families.”

Bruce Uditsky worked with Inclusion Calgary for 25 years and remains a senior advisor for Inclusion Canada.

He agrees that historically, Alberta has had one of the better family support programs in Canada but says we’re now falling behind when it comes to wages and training opportunities for people in the sector.

“We could potentially see families breaking down if some action isn’t taken very shortly,” he said.

“There has always been room for dialogue but what’s lacked in my view at least is action that follows that dialogue.”

Exasperating delays at airports are increasing claims of lost or missing baggage, which one aviation expert blames on staff shortages.

What tenants can do if their landlord plans to increase rent