A Calgary couple has taken their protest of Iran’s hardline regime and their fight for women’s rights to the sporting world’s biggest stage – the 2022 World Cup in Qatar.

Hila Yardegar and her husband Farshid Papaei have been waving flags and wearing shirts against the Islamic regime while attending FIFA World Cup matches, including Monday’s battle between Iran and England, drawing the attention of fans and police.

Cellphone video sent to CTV News from Yardegar shows her in the stands at Al Bayt Stadium waving an Iranian flag featuring a lion and a sun, one used prior to the Islamic regime takeover 43 years ago.

The same flag was also printed on her and her husband's shirts.

At one point, her husband is hassled by another fan in the stands – the encounter caught on video.

"This is the only thing that I do for the Iranian women, and not just for women, for all Iranians in Iran. I believe I have to do it," said Yardegar in an interview with CTV News on Wednesday, speaking from Qatar.

She says during the game, security guards wearing a symbol of the Islamic regime approached her in the stands, demanding to see her phone and identification, later telling her to delete the contents of her phone.

She says she and her husband were led outside of the stadium and met by a crowd of Qatari police, who they say made similar demands. That encounter is captured on video, but shows the officers walking away.

Yardegar says they asked to speak with a supervisor.

She says they were then taken into custody and questioned for more than two hours at a police station. None of that is on video.

Yardegar says she and her husband were released without charges.

"Honestly, right now, I'm scared. Yes, I'm scared from the things that I heard," she said.

"The Islamic republic in Iran, they want (everyone) just to be silent and nobody can hear our voice, but this is the only reason I am here, and I want to just be their voice around the world," said Yardegar.

CTV News reached out to Global Affairs Canada in an attempt to independently verify the couple’s account of how they were treated by Qatari police.

"We are aware of reports of the detention and release shortly after of two Canadian citizens in Qatar," said spokesperson Charlotte MacLeod, though she was unable to confirm it was Yardegar and Papaei she was referring to.

"Consular officials stand ready to provide consular assistance as required. Due to privacy considerations, no further information can be disclosed."

Since mid-September, there have been widespread protests through numerous cities in Iran after the police custody death of 22-year-old Mahsa Amini over an alleged violation of headscarf rules imposed on Iranian women.

During protests, it's common for attendees to chant "Women, life, freedom" and call for reforms to expand human rights in Iran.

The Human Rights Activists News Agency estimates 437 protestors have been killed, including 61 children, while at least 18,000 protests have been detained.

It also reports 55 regime forces have even killed. 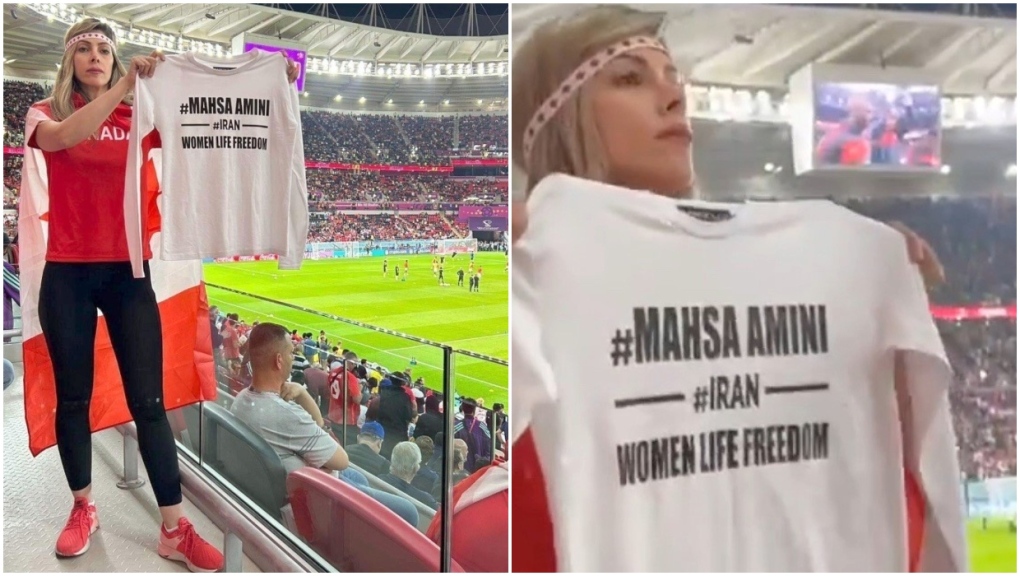 "We need solidarity with the Iranian people. They are fighting for their lives, for freedom, for human rights, to change this dictatorship in Iran," said Eghbal Kayadan, who publishes a Persian newspaper for the Iranian diaspora in Calgary.

Yardegar and Papaei brought the Canadian flag to Wednesday's match between Canada and Belgium, but also had protest shirts printed that said "Mahsa Amini," "Iran" and "Women, life, freedom."