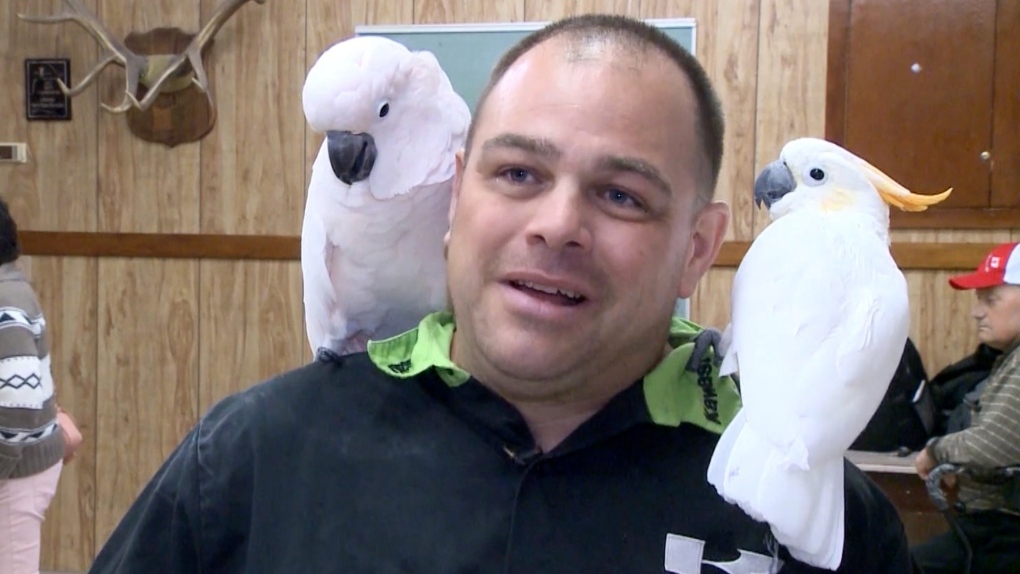 Brian Shields would often take his birds out for a walk in the park, or to local pet stores.

LETHBRIDGE -- A Lethbridge man who brought cheer to others through his pet parrots, has died after a battle with cancer.

Brian Shields was well known in the community. The 45-year-old would often take his birds out for a walk in the park, or to local pet stores. In recent years, Shields and his well-behaved birds began visiting hospitals and care facilities.

“I would call Brian an animal behaviorist more than anything else,” said Karen Hamilton, who became friends with Shields three-and-a-half years ago when he adopted a bird named Taz that she and her husband could no longer care for.

“He actually showed up on my doorstep in January with Baby (his other parrot) on his shoulder, and he was in shorts during a blizzard," she said.

"This was my first introduction to the guy, but he was just amazing with the birds."

Hamilton said Shields continued to stay in touch and would often send photos of Taz and his adventures.

“They're out camping, they're at the pet store, they're driving down the road doing something, or he'd have her in a tree, and she's plucking leaves," she said.

"I knew she'd have a much better life than what we could provide for her.”

During an interview with CTV News in 2014, Shields talked about the popularity of one of his birds, Abby, a cockatoo that had her own Facebook following.

“There’s thousands and thousands of pictures of her with people and little kids," he said.

Whether it was taking his feathered friends to work, on outings to Henderson Lake, or to pet therapy sessions, Brian was always searching for ways to keep them healthy, active and entertained.

“He intuitively knew how to tune into the birds, how to modify their behaviours, how to make them happy,” said Hamilton.

Brian was diagnosed with kidney cancer last year but was determined to continue with scheduled pet therapy visits.

“There’s no point in sitting home feeling sorry for yourself," he told reporters at the time.

Shields underwent surgery and cancer treatment and friends said he appeared to be doing well. Karen says she spoke to Brian about two weeks ago while he was out camping with his parrots Baby and Taz.

Friends said Shields failed to meet a friend on Aug. 8, and upon checking, was found dead in his home.

Shields' parrots, Taz and Baby are currently in foster homes arranged through the Lethbridge and Calgary Parrot Clubs. A spokesperson said the birds are being well looked after pending estate and family discussions about their future care.