'We want our lives back': Blackfeet Nation shares COVID vaccines with Canadians

CARDSTON, ALTA. -- The Canada-U.S. border near Cardston, Alta. was flooded with people hoping to get their hands on either a Pfizer or Moderna COVID-19 vaccine.

Blackfeet Nation has vaccinated the vast majority of its members and has since decided to share some of the world's most sought after substances with Canadians who have been waiting to get either their first or second shot.

Roughly 750 people were vaccinated in a similar effort last week for members of the Blackfoot Confederacy and residents of Cardston.

"I am actually brought to tears today hearing that the efforts to assist our relatives and folks across the medicine line with vaccines has been awesome," said public information officer with the Blackfeet Tribe James McNeely following last week's drive-thru vaccine effort.

Wednesday's turnout was much larger with cars stretching roughly three kilometres down the highway leading up to the border by 8 a.m.

For those who have been waiting months to get the jab, an extra few hours wasn't too much of a hassle.

"We're just having a good old day just singing and laughing and playing and making the best of it," said Shawn Shannon who waited in line for about three hours.

"We just want to get it done. We want our lives back just like everybody else."

Some people who showed up to the temporary vaccination site at the border drove for hours in hopes of getting past the line to receive a dose of the vaccine.

There was an overwhelming sense of gratitude towards the Blackfeet Nation for their generosity. 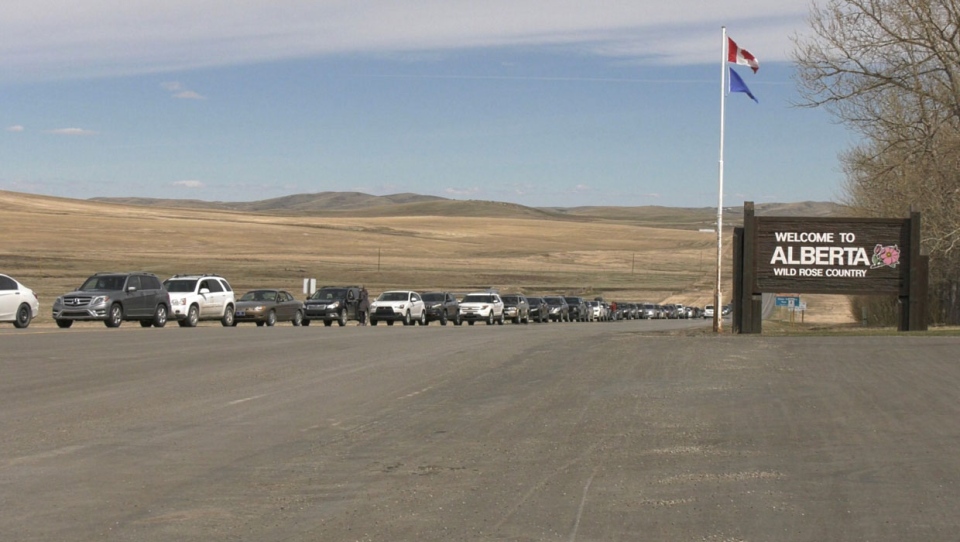 Anyone aged 16 and up was eligible to a shot so long as they provided their passport or status card at the drive-thru site.

Cars were turned around to head back into Canada as soon as the vaccine was administered making anyone who participated was exempt from Canada's mandatory 14-day quarantine period.