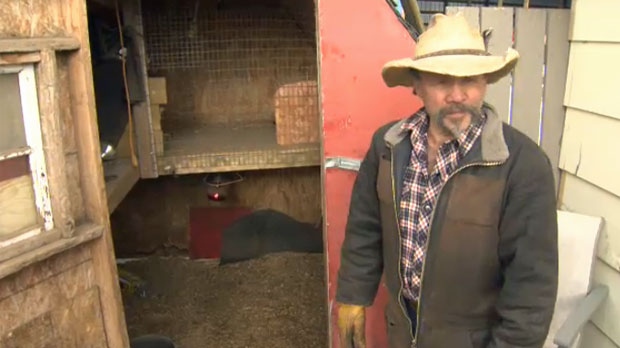 January 2018 image of Fred Brokop standing next to what he referred to as a 'puppy pen' , where he says dogs belonging to other tenants were kept warm, dry, fed and given water on a daily basis

A 57-year-old Calgary man who had the property he leases in southwest Calgary raided by members of the Calgary Police Service during an animal welfare investigation in January 2018 has had the 15 weapons charges against him stayed.

Fred Brokop had been charged in connection with the unsafe storage of long rifles. Alberta Justice confirms all charges against Brokop were stayed in November 2018.

The police presence on the property in the 8300 block of 150 Avenue Southwest was spurred by a Calgary Humane Society investigation into suspected animal cruelty. A total of 40 animals including quails, dogs, cats and a gecko were found to be in distress and seized from the property. At the time of the seizure, Brokop confirmed to CTV Calgary that all of the seized animals belonged to his tenants. Brokop has been banned from having animals until 2027 following two unrelated animal welfare convictions in 2017 but he is allowed to board horses.

Officials with the Calgary Humane Society confirm that Brokop was not charged in connection with their investigation into suspected animal cruelty on the property he leases but the investigation did result in a total of 36 animal cruelty charges against five individuals.

CTV Calgary reached out to Brokop but he declined to comment on the staying of the charges.