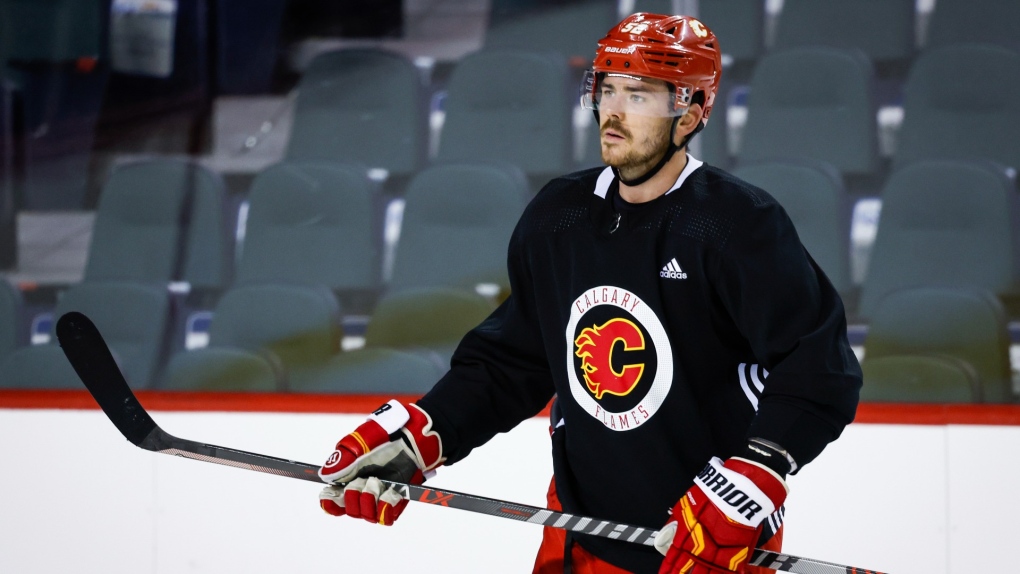 The Calgary Flames have signed MacKenzie Weegar to a sizable contract extension that's expected to keep him wearing red and white for years to come.

Weegar, who was acquired in the off-season from the Florida Panthers, agreed to an eight-year, $50-million extension; an average annual salary of $6.25 million.

The defenceman tallied eight goals and 36 assists in 80 games with the Panthers in 2021-22, his sixth season with the team.

He says he agreed to extend his contract because he believes in the team.

"You know they want to win and we have a winning team, a winning coach and a winning culture in here and that was another important step to sign here," he said Friday.

"He's a good player. He plays both sides. He's got a zest for the game," he said. "He's coachable, he's the right age group (and) he's got a lot going for him."

Meanwhile, Weegar says he is looking forward to playing in Calgary and a long career in the NHL.

"It's been such a long road that I don't really care where I am in the league, you know this is the NHL and I want to play in this league for as long as I can," he said.

"I couldn't be more thankful and blessed that I could play in this league for eight more years."

The 28-year-old Ottawa native was traded to Calgary alongside Jonathan Huberdeau, Cole Schwindt and a conditional 2025 pick in the off-season as part of the deal that sent Matthew Tkachuk stateside.

In August, the Flames signed Huberdeau to an eight-year extension worth $84 million.

(With files from Glenn Campbell)

Prime Minister Justin Trudeau made an appearance on Friday's episode of "Canada's Drag Race: Canada vs. the World" to offer the contestants words of inspiration before the main challenge.

A new study has confirmed the authenticity of an ancient Roman coin long considered fake but which researchers now believe depicts the image of a forgotten emperor.

Prime Minister Justin Trudeau gambled just by showing up. And he appears to have won in the court of reasonable public opinion, Don Martin writes in an exclusive column for CTVNews.ca.

'What if the worst had happened': Trudeau explains why he invoked Emergencies Act when he did

On the stand at the federal inquiry examining the federal government's invocation of the Emergencies Act, Prime Minister Justin Trudeau revealed candidly that a central factor in his historic decision to enact unprecedented powers to shut down the 'Freedom Convoy' protests, was his fear of what could happen if he didn't.

NASA's Orion capsule entered an orbit stretching tens of thousands of kilometres around the moon Friday, as it neared the halfway mark of its test flight.

A marriage annulment that removed a B.C. woman as a beneficiary from her ex-husband's pension plan has been cancelled after a judge determined an "imposter" had agreed to the terms in court.