The best-known stolen adaptive bike of the summer has been recovered, albeit missing almost all of its adaptations.

Calgary Police announced Tuesday that they've recovered the modified bike belonging to Ryan St. Lawrence, the parapalegic cyclist from New Hampshire, whose bike was stolen from a rack on his truck in Calgary on July 28, while it was parked in the lot of a hotel near the Calgary Airport.

The bike was stolen along with a friend’s mountain bike (a third bike, also an adaptive cycle, that was on the front of the truck wasn't stolen).

While initially it appeared to be a good news story, St. Lawrence, when contacted by CTV's Camilla Di Giuseppe, confirmed that what's left of the bike isn't much.

"I have the bike," he wrote. "It does not have the motor or the seat or the seat bracket. The frame is also broken beyond repair.

"And the other bike is still missing. Hardly a glorious story."

The combined value of the two stolen bikes was $15,000 -- but because it was built specifically for St. Lawrence, it was a one-of-a-kind item. 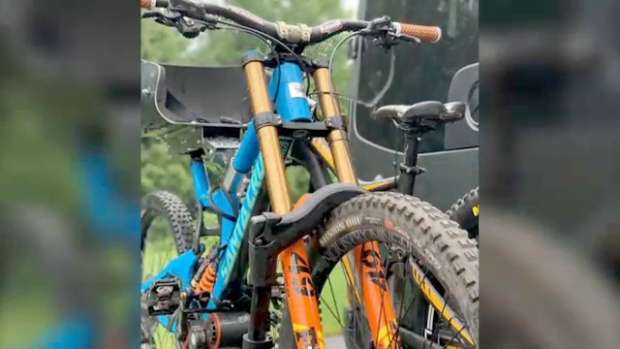 "That bike is not replaceable," Lawrence said in a CTV News interview with Di Giuseppe on July 29. "It was a 100% custom build that cannot be duplicated."

At the time of the theft, St. Lawrence said the whole experience left him reeling.

"A big time bummer moment," he said."I've had nothing but good times so far in Canada. Everyone has been super nice.

It’s not known where or when it was recovered, but the police tweeted out a photo confirming that they’d recovered St. Lawrence’s bicycle.

The #Calgary Police Service has located a recently stolen adaptive bike and are in the process of returning it to the owner.

We would like to thank the media and public for their assistance in this investigation.