'Why would someone do that?' A dozen commemorative plaques stolen in separate thefts in Calgary area

'Why would someone do that?' A dozen commemorative plaques stolen in separate thefts in Calgary area

Halya Wilson says a dedication in a northeast Calgary park allows her to remember the Ukrainians who came to Alberta more than 130 years ago.

But the brass plaque marking the Ukrainian Pioneers Park was stolen this month, one of a dozen plaques that have gone missing in and around Calgary this month.

"Just disappointed that it's gotten to the point that people need to damage property or damage plaques," Wilson said, while looking at the damaged stone marker where the plaque sat for more than 30 years.

The plaque was installed in a park along 7 Ave. NE in 1991, but recently someone pried the brass right off.

"It was a celebration of Ukrainian settlement to Canada. Now, with the war, there are people who wonder why?" Wilson said.

In southwest Calgary, in the community of Currie, a similar theft occurred. Eight brass plaques honouring recipients of the Victoria Cross medal were taken.

Four stone monuments used to have information on some of the people who had been awarded the military's medal for bravery and valour, but they now show just the glue that used to hold the plaques.

"It was more like disbelief. It was more like 'why would someone do that?'," said Irene Kerr with the Museum of the Highwood, which has been put in charge of maintaining the site for several years.

"Now we know why: they're made out of brass," she said. 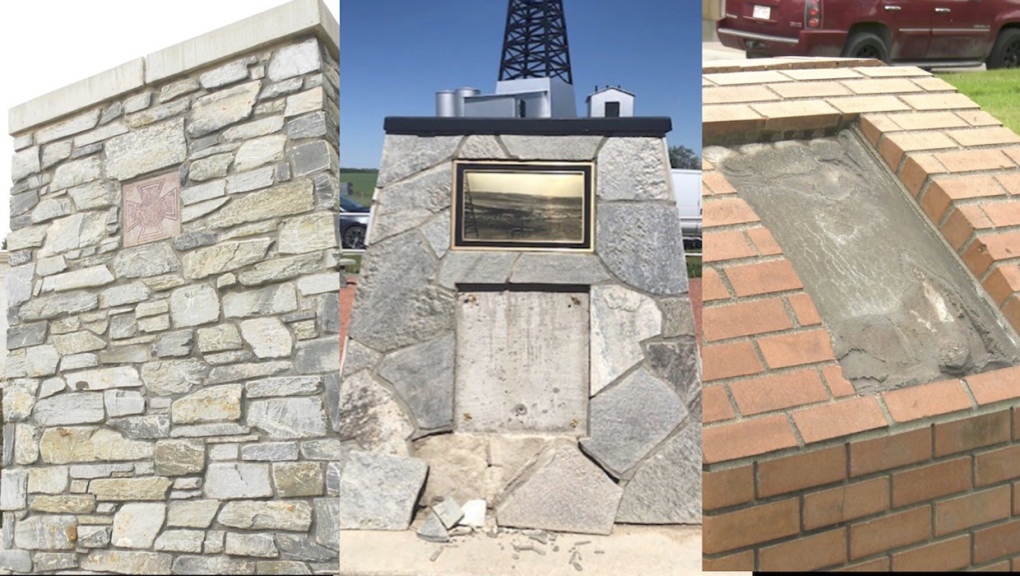 Plaques were stolen from 3 different sites

Though police have not released a motive for the recent rash of plaque thefts, people connected to the monuments believe people are stealing them to try and sell the scrap metal.

Recycled brass can sell for around $2.50 per kilogram, but provincial legislation requires all scrap metal dealers to report certain high-value transactions to police. The rules were implemented in 2020 to try and deal with the rise in catalytic converter thefts in Alberta.

Wilson and Kerr hope the plaques eventually turn up -- either in a garbage or alley, or when someone tries to sell them to a dealer -- but they already have plans to try and replace the markers.

"We'll definitely be re-doing them," Kerr said of the plaques in Longview.

"I can pretty much match what was there before, we just won't be using metal."

Anyone with information regarding the theft of any of the plaques is urged to call Calgary Police or RCMP.