CALGARY -- A group of wild horse supporters on a foal-spotting trip found themselves in the right place at the right time to help an exhausted, struggling filly Wednesday.

Darrel Glover of the Help Alberta Wildies Society  was out with three friends on Wednesday near Sundre, Alta. when a member of the group spotted a young wild horse shoulder-deep in a muskeg.

"She had noticed this mare that wasn't moving down in the muskeg," said Glover, in an interview with CTV News. "Her first thought was it's injured, her second thought was maybe it's giving birth - then she realized she'd better get some help. 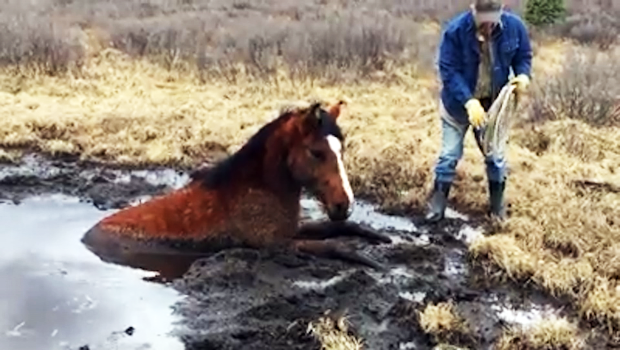 "As soon as we got close, we realized she was about 75 per cent submerged in the bog," he added. "We started working on her, not really knowing what was going to happen next. We have never pulled one out of the bog before."

The first thing to do was to put a lariat around the horse's butt.

That's when it began to dawn upon them that the horse was sunk pretty deep.

"We realized afterwards, her back legs were straight down in about a five or six foot deep hole," he said, "so there was no bottom for her. She had nothing to push on."

After a few unsuccessful tries, Glover's wife came up with an idea.

"My wife, being the Saskatchewan farm girl, got down and got dirty and got that strap under the horse's tail," he said. Then, they used the winch on the ATV. After 45 minutes, they pulled it out. 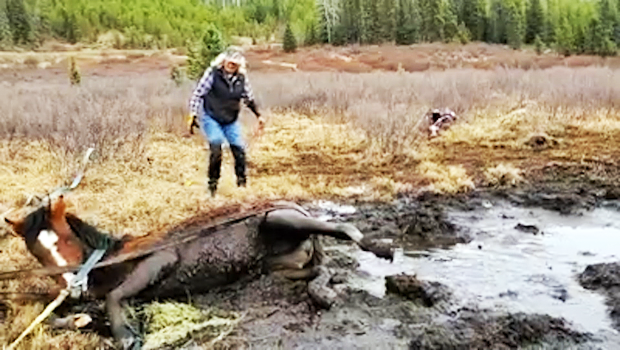 The horse was hungry. It had eaten everything within reach.

According to Glover, the filly had been left behind by her band and wasn't far from where the group had spotted a bear feasting on another yearling.

"Once we got her out, thankfully with no injuries, we realized she had been in there for quite a while," he said, "because her back legs and hips were totally numb - probably hypothermic." 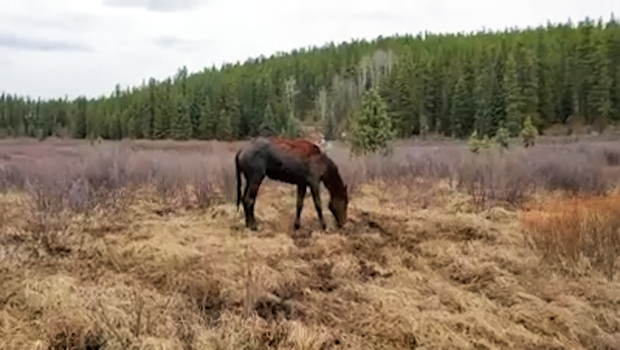