With nowhere to play indoors, Calgary outdoor rinks grow too crowded for comfort

CALGARY -- After the province shut down indoor minor sports like hockey, Calgarians flocked to outdoor rinks in such numbers that a new problem has arisen: how do you socially distance on an outdoor rink?

Lakeview Community Association spokesperson Katharine Butler was one of those Calgarians trying to do math that added up to too many blades of glory for a pandemic.

"There was counts up over 70 here at once," Butler said, in an interview with CTV News. "And with the new outdoor gatherings of 10 people at a time, we had to figure out how we could implement something."

Lakeview had to temporarily close the gate on the outdoor rink.

They needed a pause to figure out how they could make things safe. Then, on Monday, the rink reopened. With the clubhouse closed, everything had to be done safely outdoors.

"We got signage from the city in terms of social distancing," said Butler, "like hockey stick distance from each other. We worked with guys that are sort of in the arena hockey space in terms of numbers of people that were on rinks indoors, so we've capped each rink at 25 people."

Hockey-mad four-year-old Calder Krawczyk was overjoyed to discover that the rink reopened.

"Because," Krawczyk said, "I'm going out here to practice!" 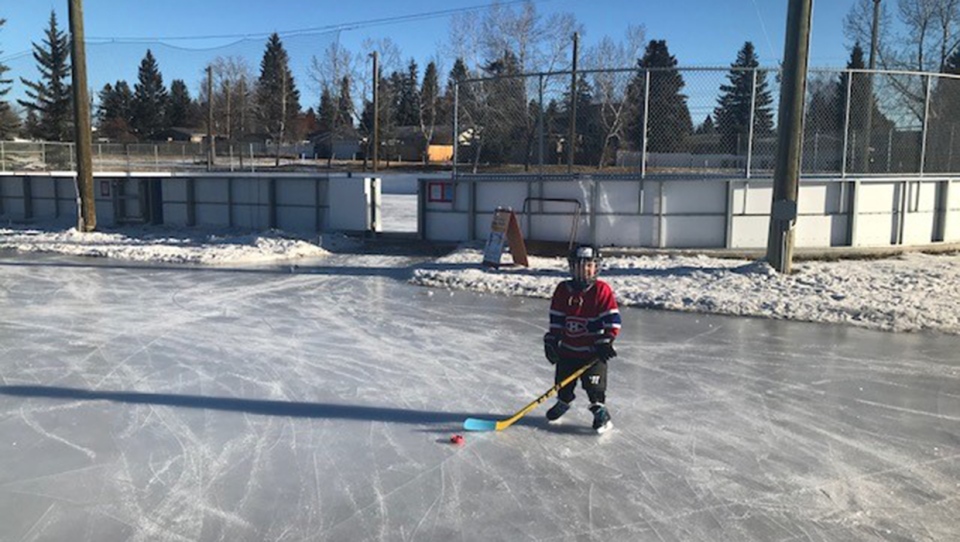 Meanwhile, Hockey Calgary is still fighting to find a way to get kids back inside and onto the artificial ice of its indoor arenas.

They won't be applying to the province for an exemption because they feel that's just for pro teams and the World Juniors, which continues to be scheduled for the week after Christmas in Edmonton.

What they are trying to do is to get the restrictions eased a bit, perhaps following a model similar to what they have in Saskatchewan, said Hockey Calgary executive director Kevin Kobelka.

"We know Saskatchewan has allowed eight players on the ice for individual instruction or one coach," he said. "They've been doing it with masks...they can't dress in the dressing rooms. They're coming with their equipment on and just putting their skates on and going straight on the ice and leaving (after the game)."

However, until the province agrees to the Saskatchewan Rules, it's outdoor rinks or no rinks at all.

And for the outdoor rinks to stay open, people have to follow the rules.

"Everyone wants to do the right thing," Butler said "Lakeview is a community that does the right thing, so we have faith that with a few more benches and a bit more space, it'll be great."