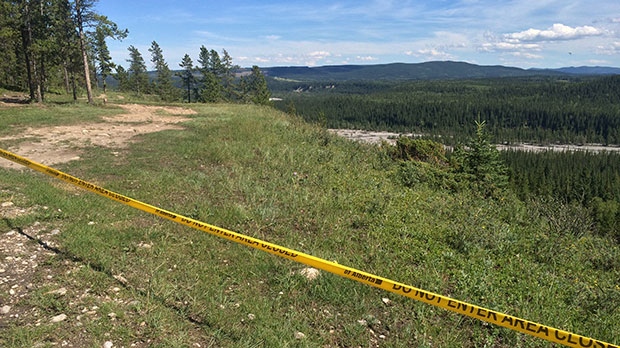 A woman was attacked by a bear near a popular campground west of Calgary on July 19, 2016.

RCMP and emergency crews were called out to a bear attack near the Trapper’s Hill Campground west of Calgary on Tuesday afternoon.

Police received a call about a bear complaint at about 12:00 p.m. Tuesday and dispatched members to the scene to investigate.

A woman and her boyfriend were having a picnic down by Ghost River and witnesses say they came face-to-face with a grizzly and her cubs.

Coleman Blair's father owns a campground in the area and he was driving when he saw the couple being chased by the bear through the river.

Blair rushed in to help and says by that time the bear had the woman's arm in its mouth.

“She was hysterical, she was in shock,” he said. “From that point I looked over a saw a couple of cubs in the tree line, maybe 50 yards away, and her standing there, still fairly aggressive.”

He says the bear could have done more damage to her if it wanted to and that he believes it was warning her.

“If the bear wanted to do some damage, I mean they’d both be dead. It was, in bear talk, more of a warning, a gentle warning, a bite like that, it wasn’t serious in that kind of regard but yeah they got a warning and it happens quick, that’s what people need to understand, it’s not, you don’t have time to get your bear spray out or take your time, it happens right now, they’re already on top of you, they’re fast,” he said.

The woman was taken to hospital and is in stable condition.

Fish and Wildlife investigators say this isn't the first time humans and bears have had run-ins.

“Bear attacks are not that rare, they typically are not fatal but we do have bluff charges in this area,” said Ron Wiebe, Fish and Wildlife. “Probably close to half a dozen in this immediate area, we’ve had people bitten and people bluff charged and some people chewed on a little more seriously.”

Wiebe says being aware and prepared is the key to staying safe outdoors.

“Always carry your bear spray and be prepared for an incident and know that you are in wild country out here and there are grizzly bears, black bears, cougars as well as a number of other animals,” he said.

The investigation has been turned over to Fish and Wildlife and they have closed Township Road 270 and are moving campers out of the affected area.