CALGARY -- Margaret and Mark Anderson’s view from the front door of their Woodbine home is now almost exclusively of construction. The southwest leg of the ring road is just steps away from the home they moved into in 2014.

Margaret says she did extensive research on the ring road project and its plans when they were deciding on whether to purchase their home in 2014. They knew the project would be built adjacent to their property and were in favour of the plans at the time.

Now, Margaret and Mark say, the highway has been moved 50 metres closer to their home and 10 metres higher than what they expected — and they only found out months ago.

“When I talked to the man at Alberta Transportation who verified the road was being elevated by 10 metres, meaning it was at the same level as our home, I didn’t sleep. The next two nights I didn’t sleep, I forgot to eat.” 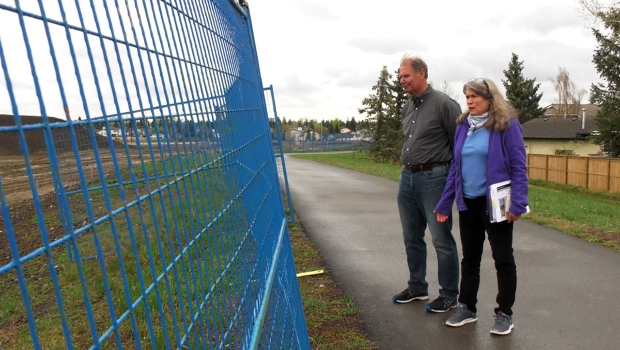 Construction on the southwest portion of the ring road started in 2016. When it’s completed, the segment of road will stretch 31 kilometres and carry upwards of 100,000 vehicles daily.

In a statement, a provincial spokesperson says Alberta Transportation held annual information sessions for residents and updated the project’s website with changes to the plan. The Andersons, along with more than a dozen nearby residents who spoke to CTV News, say the changes were not clearly communicated and came as a surprise.

“This project is in the late stages of active construction. Changing the design at this late stage would significantly impact the cost and timeline for completion of the project,” an Alberta Transportation spokesperson wrote.

The project changes now have the Andersons considering whether they should try and move, though they say the ring road will negatively affect the value of their property if they try to sell.

“We don’t know what we will do. We thought we were here for a long time. So it’s really having a big impact on us,” Mark Anderson says.

The southwest ring road is expected to be completed in 2021.