'Worst of the worse cases': Alberta horse owners on alert for outbreak of fever 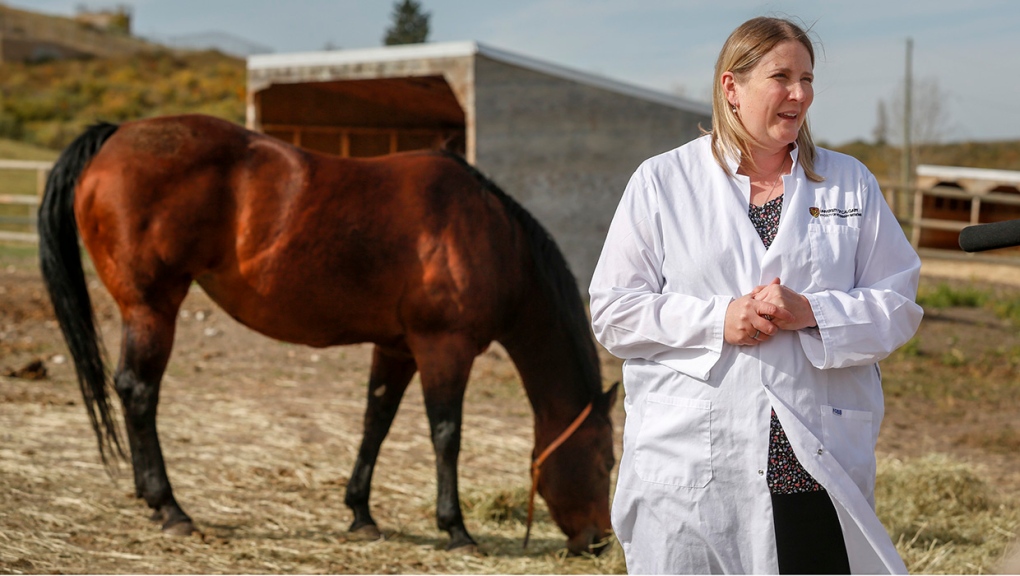 CALGARY -- Sue McIntosh thought her horse, Finnegan, looked a bit off, so she rushed him to a veterinary clinic a couple of weeks ago.

The 13-year-old horse was diagnosed with Potomac horse fever, a disease that kills horses in up to 30 per cent of cases.

An outbreak of the illness has been declared in Alberta.

"He was in critical care for three days and then he was there for another couple of days on IV with his ice boots on," says McIntosh, who runs a horse therapy program at Cremona, northwest of Calgary.

"It's not just our family that's affected, because people are very connected to these animals and they were worried."

Finnegan recovered and was sent home, where he nuzzled with McIntosh during a recent interview.

The Moore Equine Veterinary Centre, just north of Calgary, treated Finnegan and several other horses with the illness.

"The ones that we see are typically the very sick horses," Dr. Gillian Haanen says while checking on a patient. Fluid dripped into the horse from two large clear bags connected to the ceiling of a stall.

"Treatment is trying to kill the bacteria with an antibiotic, lots of fluids," Haanen says, adding boots filled with ice are also put on the horse's hooves to help with inflammation.

"In the more serious cases, they kind of go into this downward spiral where they're not feeling well. So those horses generally need aggressive treatment."

Potomac horse fever produces mild colic, fever and diarrhea in horses of all ages, as well abortions in pregnant mares.

The bacteria lives inside snails, slugs and aquatic insects, such as mayflies and caddisflies. Horses eat the bugs while drinking water or eating hay or grass.

Infected animals can lose up to 100 litres of fluid per day.

"You might have clusters of cases and that's what we're really seeing in Alberta this year," says Dr. Ashley Whitehead, a senior equine specialist at the University of Calgary.

"At the clinic I worked at, we've probably had about 16 cases come in the last two months. And that may not seem like too much, but it's a significant amount. Because we're seeing the worst of the worse cases."

Whitehead says the university is participating in a study at the University of Guelph, which is looking into a second bacteria that can also cause the illness.

Some horses appear to be more susceptible to getting the fever, says Whitehead. It could be something that disrupts the loads of bacteria in a horse's gastrointestinal tract.

"Anything that changes that harmony ends up causing the potential for something else to get in and overtake it," says Whitehead.

"Anything that stresses the horse can change that bacterial population in there."

Jennifer Maciej has her own theory.

"It was absolutely horrific. He went from the diarrhea, depressed, not wanting to eat and all of that," she says from her home east of Edmonton.

“You could see the emotion. You could tell that he was still there. But the third time I went and saw him, he was done. It was like, 'I'm so sorry. I'm done fighting.”'

Maciej says horses are attuned to the emotions of their owners. And during the COVID-19 pandemic, many people have been upset in their personal lives.

"We've got a lot of people that are stressed, especially this year with COVID. And when people are stressed, it transfers over to the animals. And they can only take so much," she says.

"It's like with people, we're more susceptible to getting sick when we're stressed. I believe animals are exactly the same."

Although horses can get a form of coronavirus, there's been no record of equine cases of COVID-19.

This report by The Canadian Press was first published Sept. 28, 2020.