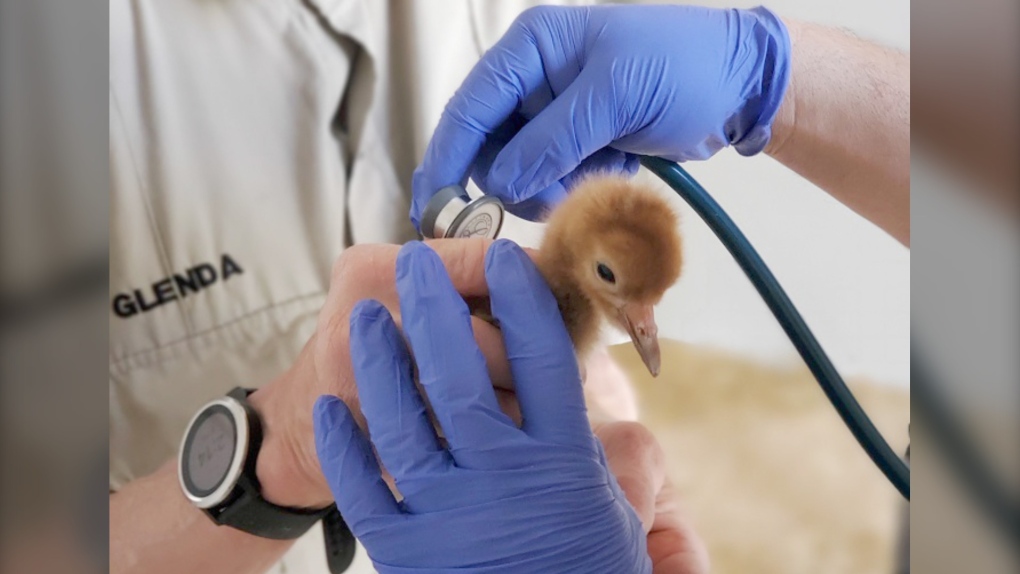 A newly hatched chick — which was fostered by whooping cranes Gary Snyder and Inukshuk at the Calgary Zoo — undergoes a checkup from the animal health, care and welfare team. (Courtesy Calgary Zoo)

CALGARY -- The Calgary Zoo is celebrating the arrival of three, newly-hatched whooping crane chicks — including a rare set of twins — thanks to some help from the animal health, care and welfare team.

Avian partners Hercules and Helsinki have hatched and raised several chicks in the past, but artificial insemination is needed for them to conceive.

A procedure was done in the spring and 28 days later, members of the animal care, health and welfare team noticed an egg was in the early stages of hatching.

"But, there was an issue – the chick was malpositioned and had pipped outside of its air cell," the zoo said.

"The animal care, health and welfare team sprang into action. With the helping hands of the veterinary team, the first whooping crane chick of 2021 successfully hatched."

Another of the zoo's whooping crane partners, Tim and Bombadil, have conceived several times in the past, but haven't yet successfully hatched a chick.

"They figured it out this year, and after 32 days of sharing egg sitting duties, they successfully hatched a chick."

Tim and Bombadil actually had two fertile eggs this year and, given their past challenges, the animal caregivers decided to move the second egg to be fostered by whooping crane pair Gary Snyder and Inukshuk.

"Gary Snyder and Inukshuk are solid incubators and excellent chick raisers, but didn’t produce a fertile egg of their own this year," said the zoo.

"(After) 33 days of shared egg sitting duties, Gary Snyder and Inukshuk successfully hatched Tim and Bombadil’s second fertile egg and are off to a great start raising their chick. Twin chicks is rare in the whooping crane world – having two parenting units sharing the load exponentially increases the chance of survival for both chicks."

Officials say they are "cautiously optimistic" that these three whooping crane chicks will survive and grow.

Whooping cranes are currently listed as endangered on the IUCN Red List and are one of three bird species in Canada in that category.

The whooping crane is the tallest bird in North America. Adults are almost 152 centimetres (5') tall and are the rarest crane species.