After 31 years, Calgary Flames organist still playing to his own tune

CALGARY -- He’s never scored a goal in the National Hockey League, but Willy Joosen still knows how to make the crowd at the Saddledome cheer, clap and sing.

Joosen has been playing the organ at Calgary Flames games for more than 31 years and he doesn't show any signs of slowing down.

"This is like plugging my finger into a socket, coming here and doing this," Joosen said. "No matter how I feel, I’m going to get (to the Saddledome), sit down and wow! It’s transformative."

Joosen has been the man behind the music since 1988. He remembers the first game he played at the Saddledome on Oct. 17, 1988.

"That was (Wayne) Gretzky here as a Los Angeles King for the very first time and we pancaked them. It was 11-4," he recalled.

It was that same season the Flames won the Stanley Cup. Joosen says he recorded Peter Maher’s radio call of the final game and would drive around for hours, replaying the game in its entirety over and over.

Joosen says he’s a Flames fan first and he is just lucky enough to be able to work for the team. It has allowed him to watch all of the team’s greatest moments from the last three decades.

"You gotta have heart in the game," he said. "It’s this roaring privilege to be like ‘Are you kidding? I get to sit here and watch that?’" 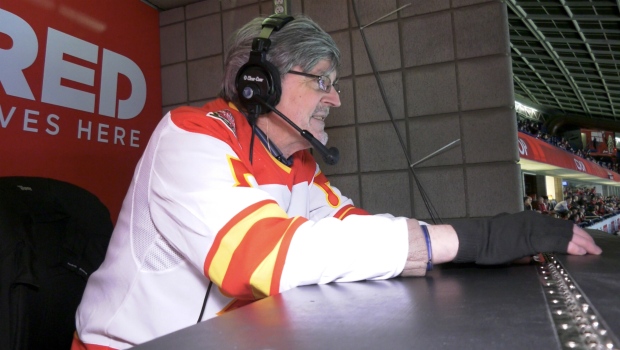 During games, Joosen leans forward over his keyboard, intently watching the play. He cheers, he pumps his fists, and he bangs his hand down on the keys to play percussion when there’s a goal or a power play called for the Flames.

He does that all during play and then, when the whistle goes and the arena announcements finish, Joosen will play whatever tune he feels fits the moment.

The game day presentation at Flames games has evolved over the years, with the team adding more lights, video screens and a louder sound system. The one constant over the decades, however, has been Joosen.

"He’s kind of like a tradition and an institution," said Steve Edgar, the Flames’ manager of game presentation.

"He’s been doing this for almost 32 years now and he just provides us with an element of our show that we can have a lot of fun with," he said.

Watching Joosen at his spot at the top of the Saddledome’s second level, it’s clear he’s someone who enjoys his job. When he’s not watching the puck, he’s practicing a song or coming up with a new tune he thinks the crowd will like. He also tells dozens of jokes during breaks in the game ("Why couldn’t the lifeguard save the hippie surfer? He was too far out, man.") and discusses music.

Joosen is now approaching his mid-60’s, but says he plans on playing at Flames games as long as the team lets him and his health allows him.

He has too many tunes to play and too many games yet to watch, he says.