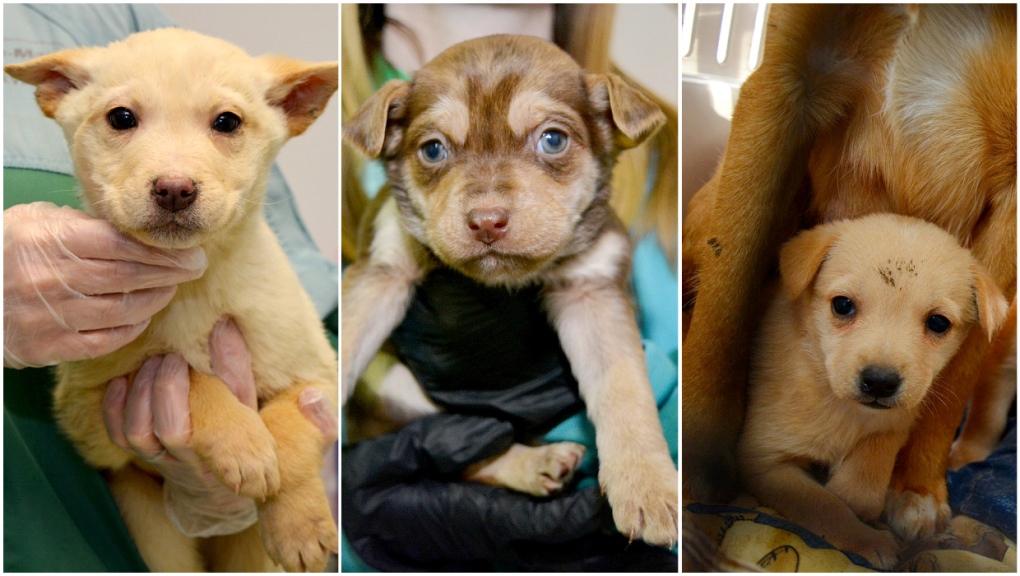 The Alberta Animal Rescue Crew Society is in need of foster homes after taking in 63 animals this week. (Photos courtesy AARCS)

CALGARY -- The Alberta Animal Rescue Crew Society (AARCS) is in "desperate" need of foster homes for dogs and puppies after taking in 63 animals from Saskatchewan and northern Alberta this week.

A total of 44 dogs from Saskatchewan and 19 animals – 15 dogs and four cats – from northern Alberta arrived at the Calgary shelter Thursday, which will be spayed and neutered, vaccinated and given a check-up by a vet.

Then AARCS will need foster homes to care for them.

"These animals are homeless and the weather was turning. We got a call from a humane society up north that was full and needed spots for their animals. As well as a rescue group in Saskatchewan, these animals were living outside and with the change in the weather, they very likely would have perished had they not been rescued."

With around 500 animals now being cared for by AARCS, Thompson said the shelter is nearing capacity.

"We're desperate for volunteer foster homes to come forward to foster a puppy or two so we can make room for more as the weather continues to get cold here in January," she said.

Many of the dogs are puppies, around five weeks old. Dogs are adopted out starting at eight weeks of age, meaning they'll need to be fostered for about a month.

And AARCS covers all the costs, from food to kennels to toys and veterinary needs, of the foster animals.

Because of that, they're also in need of donations.

"They'll all be vaccinated, de-wormed and provided with any other medical treatments they may need," said Thompson. "(It will cost) probably well over $10,000 to $15,000 to provide the care and medical care for these animals. And we're currently caring for around 500 animals."

Anyone wanting to foster an animal or donate should visit the AARCS website.