CALGARY -- World Suicide Prevention Day this year is being marked amid the COVID-19 pandemic and economic crisis, but provincial data released to CTV news does not show an increase in suicides.

Preliminary data from the Alberta Justice, Office of the Chief Medical Examiner shows that so far, suicide deaths in 2020 are trending below the six-year-monthly-average.

In July 2015 there were 68 deaths, this past July recorded 42 — data for 2020 is still being compiled as many investigations are still underway and could cause the numbers to fluctuate. 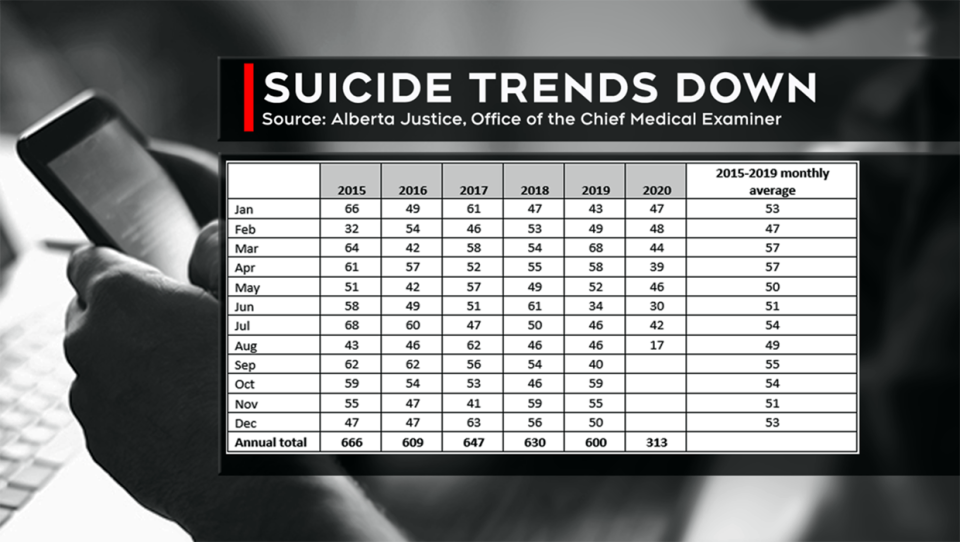 “We (were) concerned that with the pandemic and with social isolation the numbers may spike but we are doing everything we can to prevent that,” said Jason Luan, Alberta’s associate minister of health.

His office says part of the reason for the dropping rates is the $53 million invested in the COVID-19 Mental Health and Addiction Action Plan, which included improvements to existing helpline services, clinical supports, recovery treatments and online services. 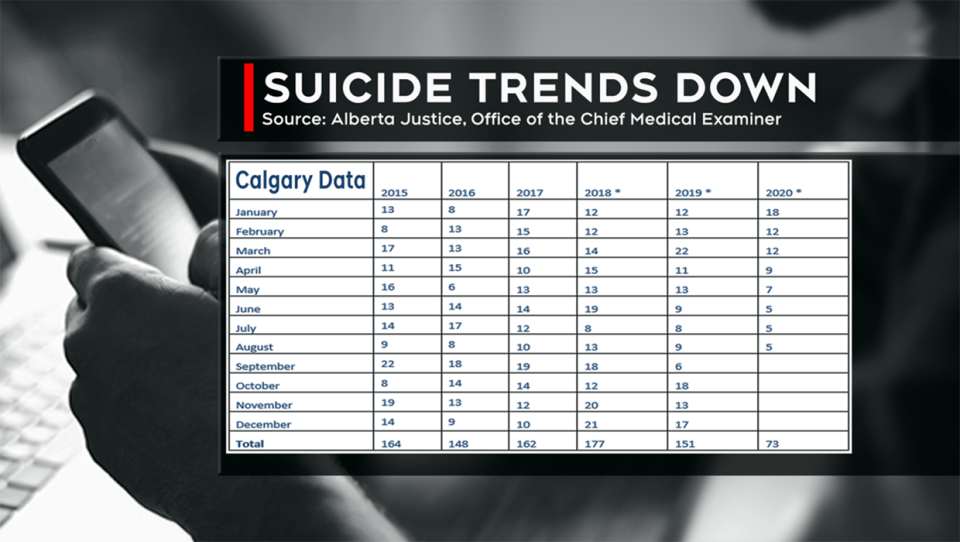 Luan also added that he his hopeful, and will release more details about a mental health strategy in the coming weeks.

At the same time, groups that support people in distress say they have experienced more contacts for help especially since the pandemic began.

Calgary-based Centre for Suicide Prevention says its are seeing an “alarming” increase in crisis line contact, with an 83.8 per cent increase between August 19 -24 compared with the same week long stretch in 2019.

“But that’s not necessarily bad, the volume is alarming and we are definitely sitting up and taking notice but it is the behaviour we want to see. It’s people reaching out for help or people reaching out to help others,” said Mara Grunau, executive director.

She says there is no singular cause for death by suicide and there are typically many risk factors working together.

The Distress Centre says it has experienced a 23.5 per cent increase in suicide-related contacts since the pandemic started.

“We know that 2020 has been a difficult year and is still full of a lot of uncertainty. This uncertainty can lead to feelings of anxiety, stress and a whole range of emotions. We encourage anyone who is struggling to reach out to us by phone or online chat. Counselling is also available by phone and video,"  said Jerilyn Dressler, executive director at Distress Centre Calgary.

Last Friday a Chestermere family lost a 15-year-old girl to suicide, and says she endured more than a year of abuse and bullying at school .

A memorial for Abeg Kon is growing at St. Gabriel Archangel School.

“We need to do more, what we are doing now its not working. Bullying is not just a stigma,” said Gar Gar, the teenager's cousin.

The family is hopeful that bullying cases will be taken more seriously to prevent young people from taking their own lives.

Distress Centre Calgary and Centre for Suicide Prevention says anyone can call (403) 266-1601 available anytime. The Distress Centre also offers online daily chat and text support for youth starting at 3pm on weekdays and noon on weekends.