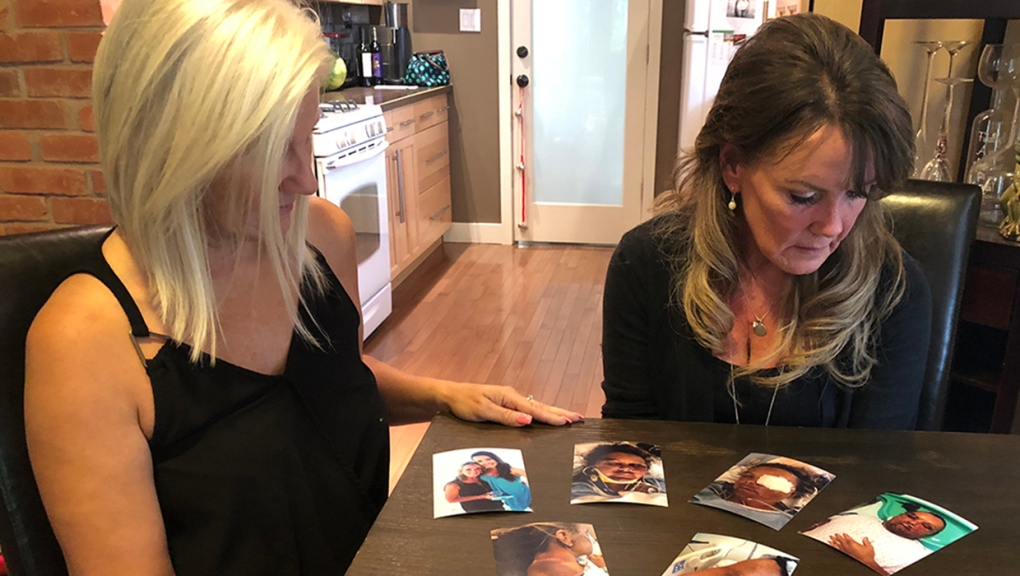 Krista Boechler and Dianne Denovan look at photos of the injuries Denovan suffered at the hand of her ex-boyfriend who, unbeknownst to her, had a history of abusive behaviour. Clare's Law, which Alberta adopted five months ago, allows people living in violent of abusive relationships to fill out an online application asking police to share any violent criminal history of their domestic partners. It also puts the applicants in touch with social services that can point them towards the best supports and counselling.

Alberta Premier Jason Kenney has commended a Calgary woman for sharing her story of domestic abuse and promised the United Conservative government will pass Clare's Law.

Dianne Denovan's story has sparked a petition pressing for legislation that would allow Albertans to access the criminal records of potentially abusive partners.

Denovan survived an hours-long attack by her boyfriend of seven months, and only after the attack learned of his abusive past.

"Thanks to Dianne Denovan for having the courage to tell her story of violent abuse by a boyfriend (with) a criminal past," Kenney wrote in a post online.

"Experiences like Dianne's are exactly why we will keep our word to pass Clare's Law."

Thanks to Dianne Denovan for having the courage to tell her story of violent abuse by a boyfriend w/ a criminal past.

Experiences like Dianne’s are exactly why we will keep our word to pass Clare’s Law, to allow Albertans access criminal records of potentially abusive partners. https://t.co/8atq6zL0eG

The policy, named after murder victim Clare Wood, was created in 2014. Wood was unaware of her partner's violent history, including jail time for holding a woman captive at knifepoint.

The UCP government has told CTV News Calgary the legislation will not be ready this year, but that "it's a campaign promise we made to Albertans, and it's a promise we intend to keep."

In 2018, Saskatchewan became the first Canadian province to introduce legislation that permits people to request information from police about a partner’s criminal record. The Interpersonal Violence Disclosure Protocol Act passed in the spring of 2019 but will not take effect until protocols are developed.