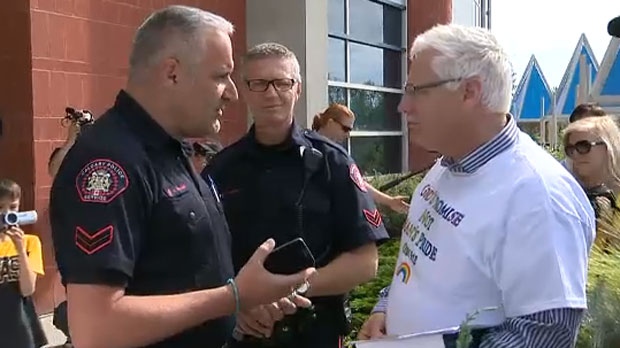 Anti-gay activist Bill Whatcott turned himself in to police in Calgary in response to a Canada-wide warrant for his arrest. (CTV Calgary)

An anti-LGBTQ activist, wanted on a Canada-wide warrant for inciting hatred in Toronto, has turned himself in to police in Calgary on Friday morning.

Bill Whatcott was charged with distributing hate literatures at Toronto’s Pride Parade in 2016 when he appeared dressed up as a ‘gay zombie’ and handed out homophobic pamphlets.

A Canada-wide arrest warrant was issued earlier this year and on Friday morning, he arrived at the Calgary Police Service’s headquarters, surrounded by chanting supporters, to turn himself in to face the charges.

This isn’t the first time that the anti-gay activist has had a brush with the law in regards to his beliefs.

In 2014, Whatcott and another activist, Peter LaBarbera, were charged for displaying materials at the University of Regina that were in violation of the school’s policies.

Both men were found not guilty.

A year earlier, Whatcott lost a Supreme Court appeal of a Saskatchewan Human Rights Tribunal ruling against him for distributing homophobic flyers door-to-door in Regina and Saskatoon in 2001.

(With files from CTV Regina and CTVNews.ca)