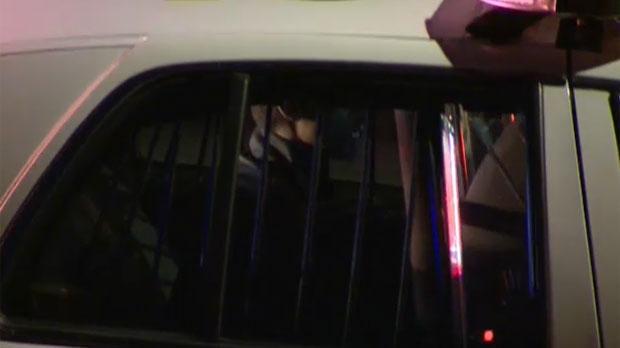 A man sits inside a CPS unit on Friday night following a stabbing attack on a mother and son in Beddington Heights.

A 20-year-old Calgary man faces charges in connection with Friday night's stabbing attack that sent a woman and her young son to hospital.
On Friday, at approximately 7:00 p.m., the mother and son were walking in a park in the 100 block of Bearberry Crescent N.W. when they were approached from behind and attacked. Neighbourhood residents heard the screams of the victims and called 911.
An off-duty nurse attended to the injured woman and boy, believed to be approximately six years old, until emergency crews arrived.
The boy was transported by ambulance to the Alberta Chidren's Hospital for treatment of stab wounds to his back while his mother was taken to the Foothills Medical Centre with stab wounds to her back. At the time of transport, the pair were considered to be in critical condition but, as of Saturday afternoon, they are now considered to be in serious but stable condition.
Witnesses provided officers with a description of the assailant and a suspect was apprehended a short distance from the scene of the stabbing.
John Garang Luka Yag, a 20-year-old Calgary man, has been charged with two counts of attempted murder in connection with the attack.
Police suspect the attack was random and not targeted. The suspect had been visiting a home in the neighbourhood prior to the stabbing.
Yag is scheduled to appear in court on Tuesday.
RELATED IMAGES
view larger image