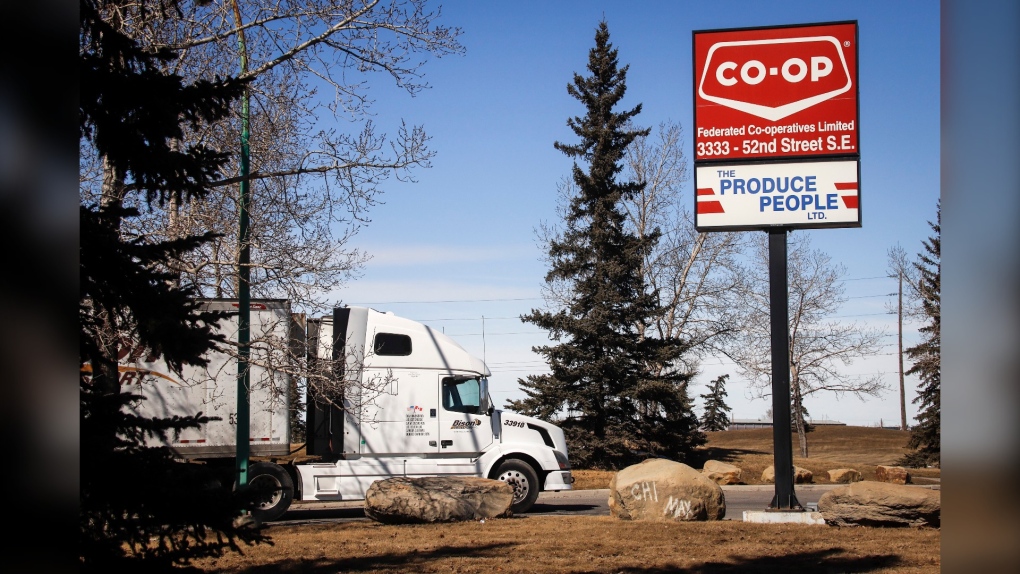 A truck is shown at the Federated Co-op warehouse in Calgary, Alta., on March 27, 2020. (THE CANADIAN PRESS/Jeff McIntosh)

CALGARY -- When a relationship breaks down after more than 60 years of mutual benefit, feelings are bound to get hurt.

In the ongoing dustup between grocery and fuel retailer Calgary Co-op and Saskatoon-based supplier Federated Co-operatives, the fallout also includes the closing of a massive Calgary warehouse this month, hundreds of layoffs and a lawsuit claiming millions of dollars in damages.

The increasingly poisonous relationship runs counter to the central "co-operative" theme that has driven the formation of co-op organizations around the world, said Tom Webb, an adjunct professor at the Sobey School of Business at Saint Mary's University in Halifax, who has studied and written about co-ops for decades.

"One would have hoped that both co-operatives would have posted the co-operative purpose, values and principles up in their boardrooms and executive office walls and referred to them every time they made a decision," he said.

"My guess is that the current dispute comes from a long line of decisions, big and small, by both sides that dented, damaged or left in tatters the purpose, values and principles that were supposed to form the basis of their relationships."

The relationship breakdown emerged publicly last August when Calgary Co-op announced it had served notice to FCL that it was switching to Vancouver-based Save-On Foods as grocery supplier in the spring of 2020, promising to "elevate" customer experiences with more local, healthy and convenient items and a new range of exclusive private brands.

It said it would continue to buy fuel from FCL.

Federated responded in November with an announcement that it would close its massive Calgary Food Distribution Centre, resulting in the elimination of over 200 local jobs.

"By aligning itself with a competitor, Calgary Co-op has directly and negatively impacted our employees, their families and Calgary's economy," charged FCL vice-president Vic Huard at the time.

The battle then spilled into the courts.

Calgary Co-op filed a statement of claim against Federated in February over a new "Loyalty Program" FCL had introduced that requires participants buy at least 90 per cent of their products for resale from Federated in order to receive "patronage" (essentially, profit-sharing) payments.

For the year ended Oct. 31, 2019, Calgary Co-op — one of the largest of FCL's 168 retail co-op members in Western Canada — received $47.7 million in patronage payouts, of which $38.6 million was related to its fuel purchases on a cents-per-litre basis.

The new loyalty program was designed to "prejudicially target" Calgary Co-op, it charges in its suit, asking the court to order Federated to continue to pay its fuel-related patronage, along with unspecified damages.

In its statement of defence filed March 23, Federated points out that despite its size, Calgary Co-op has the same rights and obligations as any other member — and adds that 163 of 164 eligible members have already enrolled in the loyalty program, with the lone holdout being Calgary Co-op.

"Single members of FCL do not have the authority to dictate to FCL what programs management may or may not offer to its membership," the document reads. "FCL acts for the benefit of the co-operative membership as a whole."

In its counterclaim, Federated demands damages from Calgary Co-op, charging it breached confidentiality obligations when it negotiated the grocery deal with a direct competitor.

It says losing Calgary Co-op's grocery business will result in the loss of over $385 million from FCL's annual revenue and more than $20 million from net income, cause it to incur severance charges of $4 million for managers and more than $2 million for unionized employees as it lays off staff, force the windup of a local wholesale produce company and reduce its efficiency in providing services to customers and co-operative members.

Despite the current pressure on the grocery supply chain as customers stock up to deal with the COVID-19 pandemic, FCL spokesman Cam Zimmer says the layoff notices have been sent and warehouse employee contracts are to end as of April 13.

Calgary Co-op spokeswoman Sage Pullen McIntosh, meanwhile, says the plan to switch grocery suppliers at mid-month is proceeding as scheduled, with grocery products to be shipped through Save-On's Edmonton warehouse and distribution arm.

The latest figures from Statistics Canada show there were more than 5,800 active non-financial co-ops in the country in 2018 generating $53 billion in revenue, but only two dozen of those had more than 500 employees. The average co-op had fewer than 18 workers.

"Our co-op movement is actually really small and fragile," said Webb. "It seems big but it isn't that big."

About 44 per cent of Canada's co-ops are located in Quebec, where traditional support for worker co-operatives remains stronger than in most of the country, Webb said.

In his message in FCL's recent annual report, CEO Scott Banda summed up his level of frustration while revisiting highlights of the last fiscal year.

"The most disappointing news of 2019 was Calgary Co-op's decision to move its food business to a competitor," he wrote.

"While FCL teams worked diligently to assess the impact of this decision and adapt our business to ensure long-term success, the damage done to local co-ops stemming from Calgary Co-op's decision will be felt for some time."

This report by The Canadian Press was first published April 5, 2020.