Calgarian reconstructs The Bow building out of thousands of LEGO blocks

CALGARY -- Eight years ago, while walking in downtown Calgary, Roy Nelson looked up — way up — and found inspiration.

The Bow, an iconic landmark, became the idea of a new project for Nelson that would be constructed using iconic building blocks.

"LEGO is square, so how do you build a curved building out of LEGO?" said Nelson of the initial challenge The Bow presented.

While researching the building, Nelson discovered it might not be as hard as he originally thought.

"If you look at the actual Bow building, it's not actually curved," explained Nelson. "It has a bunch of flat pieces that are hinged to the next segment."

It took Nelson roughly five years and approximately 8,500 pieces of LEGO — at a cost of about $2,200 — to construct the building that stands over a metre tall.

Nelson, who works as an analyst for the Calgary Fire Department, spent his spare time constructing the scale model.

The most challenging part for Nelson was gathering the thousands of pieces needed.

He says the dimensions were easy to scale down into millimetres from sales drawings of each floor that had been posted online. 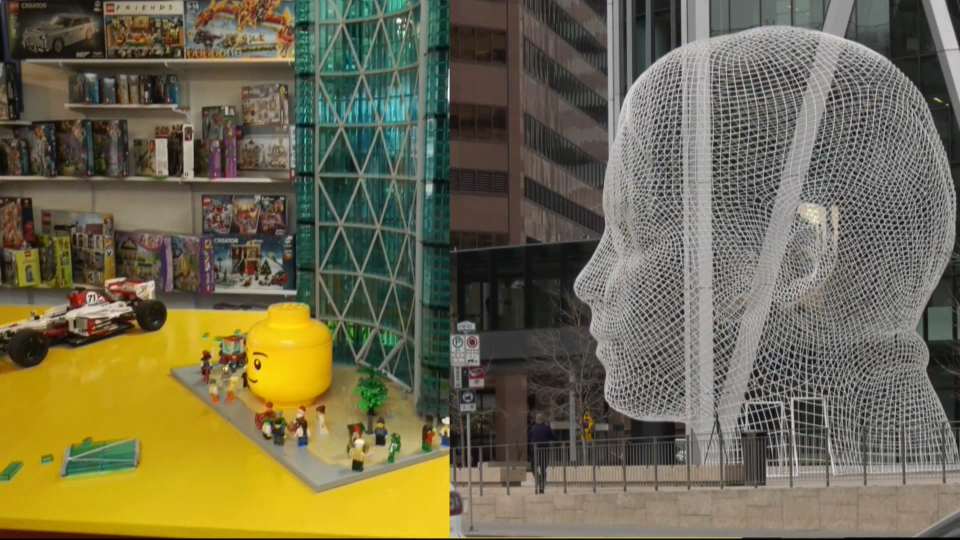 After storing it in his garage for nearly two years, Nelson realized it was time to part with his project.

"What do I do with it?” said Nelson of the problem. "Normally with LEGO projects, you rip them apart and build something new. In this case, I can’t do that to this."

Nelson says he has found a buyer, willing to purchase the piece for $4,000. The transaction is set to occur in the new year.

The building is currently on full display at a new local business that embraces all things LEGO.

"(It’s a) good conversation piece for LEGOists," said Tony Gialelem, owner of The Brick Bin. "(They) come in, they sit and stand around, and get to make friends with people as well."

Gialelem, who opened his store a few weeks ago, says it's been tricky navigating the market through the pandemic but says the restrictions have led to families spending additional time together.

"I’m a family guy so I think building stuff together with your kids, your wife, it brings the connection back. Instead of the hustle and bustle of everyday life."

As for Nelson, he has no definite plans for what's next but says he has had inquiries from people on ideas for his next project.

"Up until I got some attention on this, I was thinking more about fishing than I was about LEGO."

Nelson says he plans on donating some of the proceeds from the sale of his piece to the food bank and other charities.