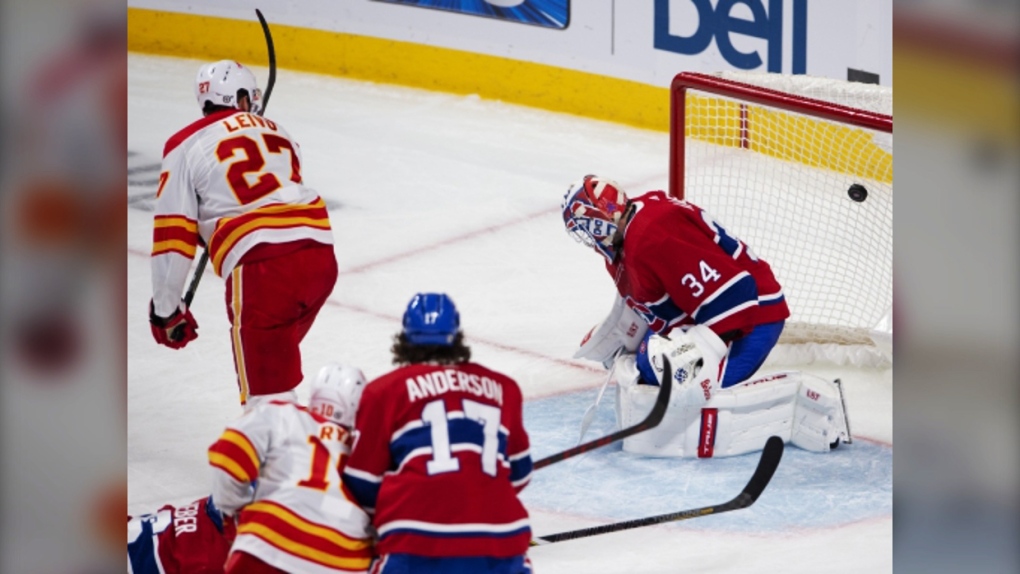 CALGARY -- The Calgary Flames turned up the heat on Montreal with a 4-1 win Wednesday over the host Canadiens.

The two clubs clash again Friday at Bell Centre, and meet four times over the next 12 days.

The Flames lead their nine-game season series 4-1. They've beaten Montreal four games in a row with the Canadiens scoring just three goals in those losses.

Their series concludes with three games in four days in Calgary later this month.

Calgary captain Mark Giordano led the Flames with a goal and an assist Wednesday.

“We have some ground to make up,” Hanifin said.

“This division, you're going to get those head-to-head games where you can really climb back in and this is the team we're chasing. We know how important these games are.”

Flames starter Jacob Markstrom made 26 saves for the win after 24 stops the previous night in Calgary's 3-2 overtime victory over the Toronto Maple Leafs.

Markstrom is expected to shoulder Calgary's goaltending load down the stretch since the Flames traded backup goaltender David Rittich to the Leafs at Monday's NHL trade deadline.

“Well, we only have what, 13 games, you look at our schedules, it's really not that hard,” Flames head coach Darryl Sutter said.

“Even if he did play every game, put it this way, he'd still be the same as what he played last year. If you look at the minutes played and all that, that's not a big deal.”

Brett Kulak countered for the Canadiens, who are 1-4 in their last five games. Goaltender Jake Allen had 30 saves in the loss.

Allen pulled for an extra attacker with three and a half minutes remaining in regulation, Montreal couldn't produce another goal.

“We're fighting for the playoff spot too,” Canadiens centre Nick Suzuki said. “They're right behind us and these games coming up are going to be huge.

“We really need to be desperate if we want to be in that playoff run.”

The Flames dominated the offensive-zone face-off circle winning 78 per cent of draws.

“We spent way too much time in our zone, we were not strong enough on puck battles, and our execution on small plays was not good enough.”

Leivo restored Calgary's two-goal lead at 12:49 of the third. He fought off Montreal captain Shea Weber and put a backhand upstairs on Allen.

Kulak halved the hosts' two-goal deficit at 10:55 of the second period.

The defenceman earned his first goal in over two years taking a Jonathan Drouin backhand feed and scoring off the rush.

Giordano's slapshot through traffic from the point 29 seconds into the period made it 2-0 for the visitors.

Hanifin scored his fourth of the season at 3:58 of the first period.

Mikael Backlund won an offensive-zone faceoff and sent the puck back to the defenceman, who blasted a rising slapshot over Allen.

The Canadiens are 9-8-5 since Ducharme replaced Claude Julien as head coach Feb. 24.

Calgary is 8-9-0 under Darryl Sutter since he took over for Geoff Ward last month.

This report by The Canadian Press was first published April 14, 2021.