CALGARY -- Golf is a game played in the great outdoors, prompting a few to suggest that during the COVID-19 pandemic it’s one sport you can play if you take the right precautions.

In Calgary, most courses usually open in about three weeks time.

But right now the golf industry in this city isn’t sure whether they’ll be open or not.

Dale Tomlinson is the executive professional at the Winston Golf Club. He says right now they’re all playing the waiting game.

“We’re just trying to listen to the health professionals," Tomlinson said in a Monday interview with CTV News. "We don’t know what they’re going to say or what the government is going to allow us."

“Our club - and it (also) sounds like most of the professional staff in Alberta - are preparing as normal in case we actually get to play some golf.”

In British Columbia, some courses are open. Tomlinson says if clubs are allowed to open in Calgary, golf will not look the same. They’ll be doing a number of things to make sure everyone is safe.

“There won’t be any contact when you check in," he said. "You’ll book your time and pay over the phone. On the golf course, if you take a cart, you’ll be riding solo. Only one cart per person. No touching the pins. We won’t have rakes in the bunkers.

"We’ll also increase our tee time intervals,"he added, "so you never get stacked up on the tee box." 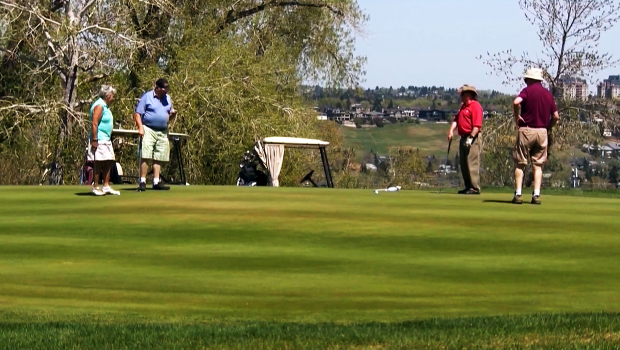 Tomlinson says the club will do anything to eliminate the risk of people coming within six feet of each other. With the downturn in the energy industry,  it’s been a couple of rough years for the golf industry in Alberta.

Tomlinson says if they’re forced to close for an extended period of time, it would be yet another major blow.

“Financially it would be pretty devastating," he says. "(Right now), we’re all just worried about the health aspect for for of our members, guests and staff," he said.

"But financially it would certainly strike a blow.”

For now golf courses will prepare as usual for opening day. Unless of course they get word from authorities to close shop.