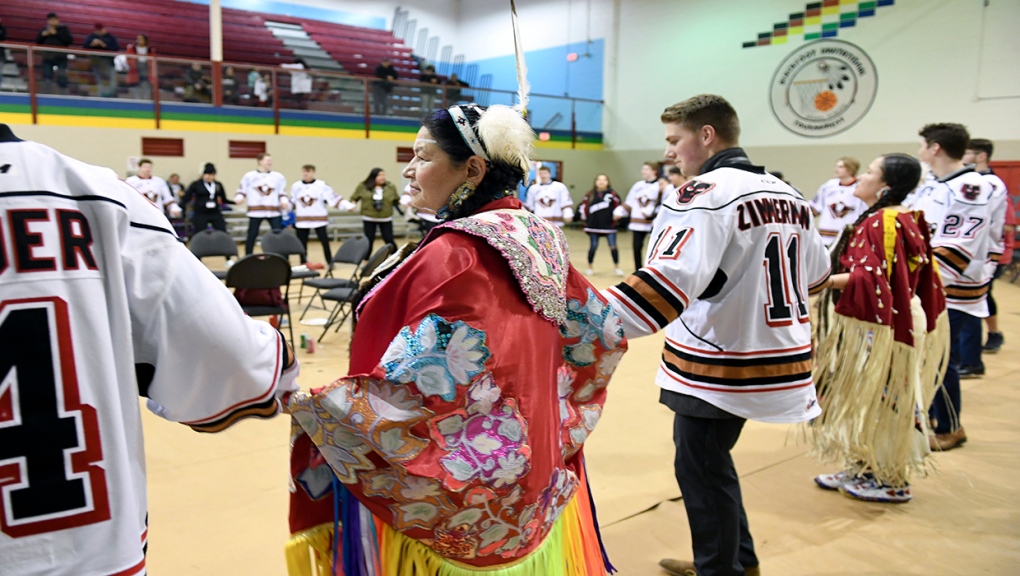 The Hitmen visited Siksika Nation in 2019 to practice. On Feb.1, they will have their entire game broadcast in Blackfoot.

CALGARY -- The Hitmen are adding a wrinkle to their Feb. 1 Every Child Matters game against the Red Deer Rebels: it will be broadcast in Blackfoot.

The event, believed to be the first professional hockey game ever broadcast in Blackfoot, came about as a collaborative effort with the Siksika HealthServices in partnership with Siksika Child and Family Services and First Nations Health Consortium.

"We are very pleased to be involved with this project," said Aboriginal Multi-Media Society of Alberta CEO Bert Crowfoot, "And look forward to providing play-by-play in the Blackfoot language.

"We also look forward to sharing this historic broadcast with all Indigenous and non-Indigenous people of Alberta."

It's the first game the Hitmen have broadcast in a First Nations language. Last March, The Aboriginal Peoples Television Network (APTN) broadcast a Montreal Canadiens game against the Carolina Hurricanes in Cree.

The game will also be broadcast in English, on Sportsnet 960 the Fan, the exclusive Flames radio rights holder that made it possible to have the game simulcast in Blackfoot.

"We are lucky to have such a community-minded partner as the Hitmen," said Fan 960 program director Kelly Kirch. "They truly understand how important reaching out and helping so many different groups in Calgary and southern Alberta is. We are excited to share the message of Every Child Matters to the great listeners of Sportsnet 960-The Fan."

The game will be available in Blackfoot on the Windspeaker Radio network, including CJWE 88.1 FM in Calgary and CFWE 98.5 in Edmonton. The goal of the broadcast is to help promote and preserve the endangered language to a larger audience.

“We are very pleased to be involved in this project and look forward to providing play-by-play in the Blackfoot language."

Feb. 1st ‘Every Child Matters’ game to broadcast live in Blackfoot across the province on Windspeaker Radio!