CALGARY -- A 38-year-old Calgary man may be facing impaired driving charges after the truck he was driving left the road and struck and killed a pedestrian on Tuesday.

The victim of the crash was just walking to the convenience store when he was hit by the alleged impaired driver.

Loved ones of Chris Muise tell CTV News he was on his way home when the incident took place.

“He just went to the store then he was going to come back home,” said a tearful Dawn Swimmer, Muise’s girlfriend of two years.

Swimmer stopped by the crash site Wednesday afternoon where fresh flowers had been placed as a memorial. 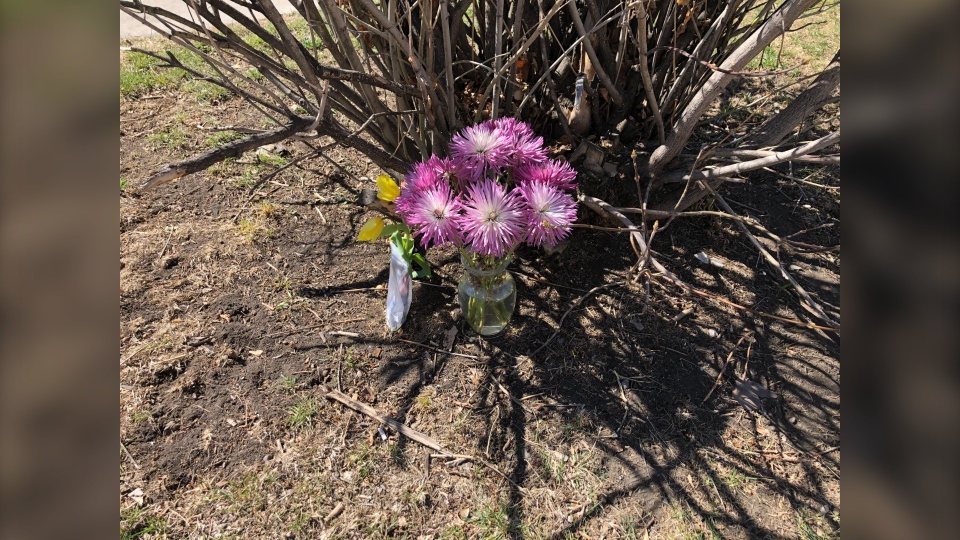 “It is really hard to fathom but I always miss him and I love him. I'm glad that people were thinking about him and also to bring down the flowers and, at least grieving by myself,” she said.

“EMS came and they really tried to save him but he was hit too hard,” said Swimmer.

Emergency crews were called to a crash near Edmonton Trail and Second Avenue N.E. at about 2:50 p.m. for reports of a collision.

Police say a 2020 Ford Ranger truck was travelling along Edmonton Trail when it left the road, went over the curb, crossed over a sidewalk and then continued on into a grassy area.

The 36-year-old victim was standing in the grass, was hit head-on by the truck and police say he was thrown a significant distance. He sustained fatal injures and was pronounced dead at the scene.

The truck continued on through the grassy area and into a cul-de-sac where it hit a vehicle. The driver of that vehicle was not injured.

The driver of the truck was arrested at the scene and was released with a provincial driving suspension.

He has not been named.

Police have launched an impaired driving investigation and say charges against the driver of the truck are anticipated once the investigation is complete.

"This is a stark reminder that impaired driving can have dire consequences and our sincere condolences go out to the victim’s family and friends who are grieving his senseless loss,” said Calgary police in a press release.

“We have to get the message out there that drunk driving kills,” said Rick Lundy, president, Calgary chapter, Mothers Against Drunk Driving (MADD).

‘When somebody gets behind a wheel when they're impaired there's a chance that they're going to kill themselves or somebody else or seriously injure them or somebody else and that's horrific. To look at this incident and think that this could be caused by an impaired driver again we shake our heads and we think there's no excuse for this,” said Lundy.

He said there are many alternatives available such as Keys Please, public transit, Uber or taxis to plan for a safe ride home. Anyone with information is asked to contact police at 403-266-1234. Tips can also be submitted anonymously through any of the following methods:

(With files from Keith Macdonald)