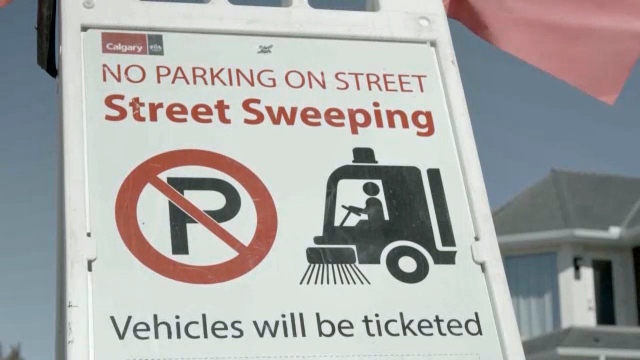 Watch for these signs in your neighbourhood starting Monday. (File)

CALGARY -- Starting Monday, City of Calgary street sweepers will hit the roads to clean the pavement of the mess winter left behind.

Street sweepers will be working their way through Calgary neighbourhoods Monday to Friday from 8 a.m. to 4 p.m.,while major routes are cleaned overnight.

The city announced Friday and that due to the large number of people not currently commuting for work, signage will be put out to let Calgarians know when they will have to move their vehicles and bins, which can be put back as soon as the street cleaning equipment has passed by.

Signs will be put in up neighbourhoods at least 24 hours before street sweeping is scheduled to begin.

Anyone who can't move their vehicle is asked to sweep debris into a garbage bag and place it in their black bins.

Vehicles that are not moved by the time sweepers roll by will have their licence plate numbers recorded. City officials will later check the area to see if the street has been cleaned.

If the area is still not swept, drivers will then face tickets.

Street sweeping around the city will run until July.