CALGARY -- Tuesday, at least 30 cars parked around the corner from Buffalo Rubbing Stone School in the northwest Calgary community of Panorama Hills.

Staff from the school taped messages on their vehicle windows directed towards the school’s principal Cathy Turner.

It wasn't a traffic jam, however, or a protest of any kind.

It was a retirement parade fit for a pandemic.

"Cathy started this school four years ago and has built a fabulous community of learners with so much fun and positive outlook," said Yvonne Carlone.

Staff originally had a farewell party planned for Turner, but all that changed with the arrival of COVID-19.

"Of course it (the party) had to be cancelled," said Grade 5 teacher Heather McIsaac. "And we were all so disappointed, so my friend Julie Montgomery messaged me the other night and said, I’m feeling really bad that we can’t do anything for her and it’s just not right to not have a proper sendoff."

So the women sent emails Monday to the rest of the staff to surprise their principal with an impromptu Tuesday parade. Turner had no idea.

"They had everybody bring their cars and honk horns and have signs and sing a song and flowers and just be here," said Turner. 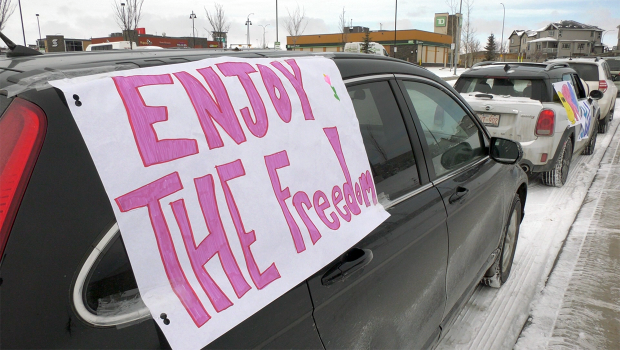 After the parade, drivers parked their cars and everyone got out of their vehicles and sang the school song led by music teacher Cam Demman.

"You’ve done it well when you’ve touched the heart and Cathy is worth it you know," said Demman. "She’s offered me so much and she’s offered the school, the community so much, so it was nice to be able to offer her that."

"We just wanted to celebrate Cathy," said Montgomery. "She means so much to us and we were trying to think of a way that we could all be here for her and still keep our distance and be safe."

Turner starts retirement April 1 and said the first thing she’s going to do is turn off her alarm clock.

"And sleep in, just much like the rest of everybody: stay in my pyjamas," said Turner.

"But I’m not going to work from home," she added. "I’m just going to rest and relax and enjoy my own family."