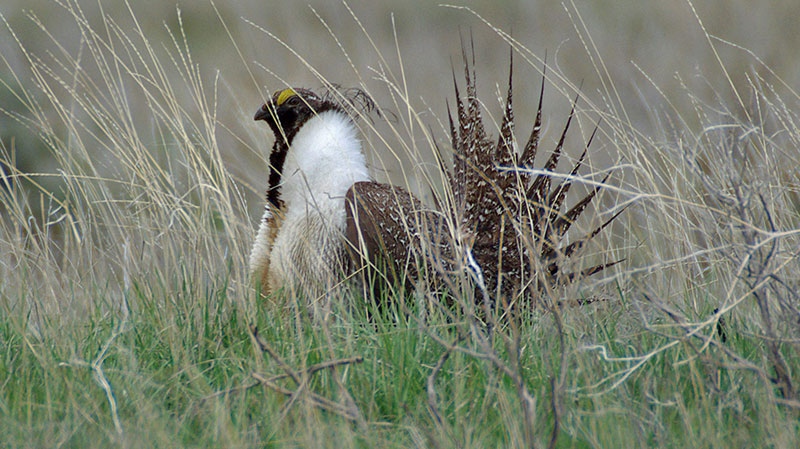 A sage grouse is shown in this handout photo. (Olson, Alberta Wilderness Association)

The Calgary Zoo will play host to an expert symposium to come up with strategies to save one of the country’s most endangered birds.

Starting this week, experts from all over North America will be meeting at the zoo to come up with an integrated plan to help the greater sage grouse in Canada.

The plan is supported by Alberta Environment and Sustainable Resource Development, the zoo’s Centre for Conservation Research, in collaboration with the IUCN (International Union for the Conservation of Nature) and the SSC Conservation Breeding Specialist Group.

“The Greater sage-grouse is the largest grouse in North America and people probably know them best for their elaborate mating dance where the male struts and puffs up its chest to compete for mating opportunities,” said Dr. Axel Moehrenschlager, Head of the Centre for Conservation Research.

Experts say that only about 100 to 150 birds are left in the country.

They are only found in southeastern Alberta and southwestern Saskatchewan and during investigations in 2011 and 2012, only 13 male sage grouse were found.

Officials say that the birds are presented with a number of challenges that threaten their health and their fragile environment.

The birds were designated as endangered in 1998, and the federal government announced an emergency order to save the species last year.

“This is the first time in Canada that the government has issued an emergency order under Canada’s Species at Risk Act,” says Moehrenschlager.

The symposium runs from January 14 to 17.