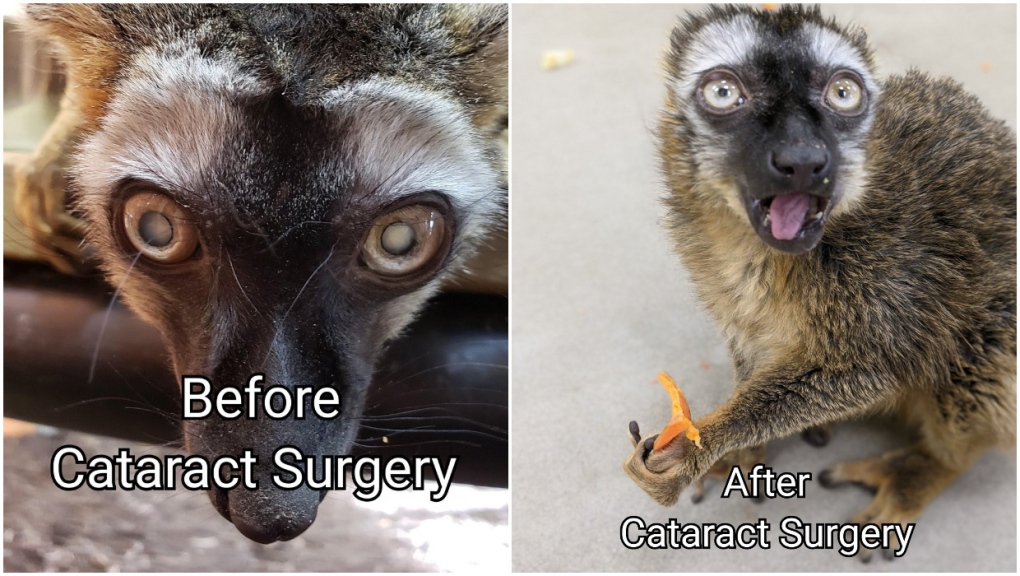 CALGARY -- Radish, a senior red-fronted lemur at the Calgary Zoo, is seeing clearly again after undergoing a difficult cataract surgery earlier this year.

The Calgary Zoo's animal care team noticed changes in the 29-year-old lemur's behavior late in the summer, after it appeared she was having difficulty seeing things in front of her.

Previous yearly exams had shown that Radish's eyes had been changing, leading the zoo to perform a complete exam on the animal.

The exam confirmed that cataracts in Radish's eyes had matured, making it difficult for her to see objects right in front of her.

While cataracts aren't common in lemurs, they are common in older mammals.

The zoo's vet team consulted with a local ophthalmologist, an animal eye doctor, to determine the best plan to repair Radish's cataracts.

A training plan was created to help with post-surgery recovery. Over several months, zoo officials trained Radish to accept eye drops in exchange for treats.

Surgery was performed in late October, which zoo officials say went off without a hitch

"The surgery was an overwhelming success and Radish was returned to her family group the very same day," the zoo said in a statement.

The days following the surgery were spent watching Radish and ensuring she stayed on track with recovery.

"As the days and weeks passed, Radish's eyes healed rapidly. She started navigating her habitat again, slowly at first and then with more confidence."

Radish has since increased her activity level and continues to forage for her favourite treats.